Mom helps fire victim who once saved her baby

BRADENTON, Fla. - The signs of the nightmare Jajahira Rosado lived through on Thursday at her 9th Street apartment are inside and out: Charred walls, smoke-damaged furniture, and orange stickers declaring the home uninhabitable.

Neighbors let her know there was a fire. She did the only thing she had time to do.

"I was sleeping, my daughters were sleeping, too," she recalled Monday. "When I looked, the fire was too much. So I ran back inside to get my daughters."

The fire not only left 11-month-old Lazier Bennett dead in a next-door apartment, but it also left other families in the building homeless, including Jajahira's.

A baby boy was found dead after a fire at a Bradenton quadplex. Lazier would have turned one on August 2.

"The smoke is on the clothes, the sofa, the beds, we don't have anything," she said. "I never thought this was going to happen to me."

That's exactly what Chaseedaw Gable said four months ago when her 2-year-old son, Antonio, went unconscious after hitting his head in a Bradenton WingStop.

Jajahira was the manager of that WingStop and was able to revive him using CPR.

2-year-old Antonio Johnson II slipped and hit his head inside the WingStop in Bradenton and then went limp. A cashier called 911 while restaurant manager Jajahira Rosado put her training as a former hospital worker to work.

"He could have been gone in an instant," Gable said Monday.

They have stayed in touch, with Chassedaw visiting the WingStop every now and then to say hello.

"I feel like she needs a friend, and I know I need a friend too," said Gable. 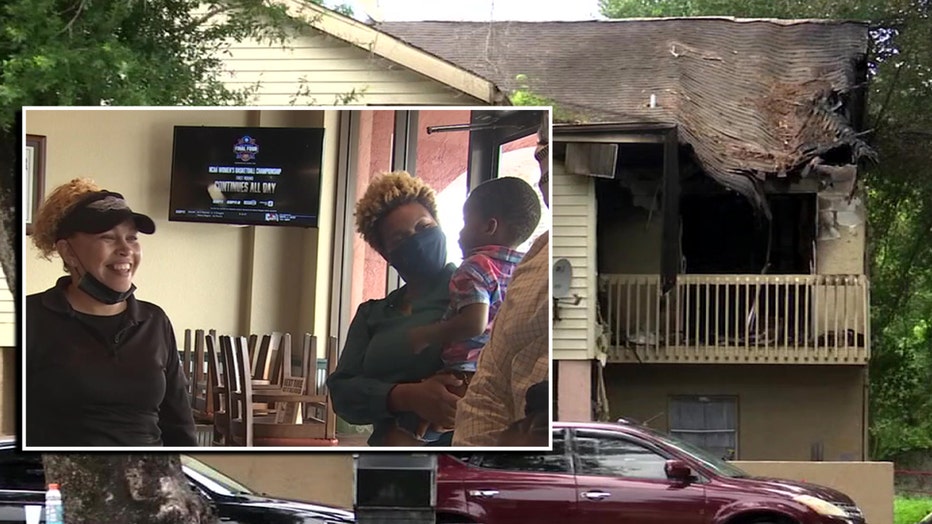 After the fire, Jajahira called Chaseedaw -- who is a real estate agent -- to ask if there was anything she could do.

Chaseedaw is now organizing a drive for food, clothing, and supplies to help Jajahira and her two daughters get back on their feet.

"We can help each other," said Rosado.

They both say there is a lot we can all learn from how they have helped one another.

"Don't take anything for granted," said Gable. "It doesn't take long before something happens to you or before you are in somebody else's shoes."

LINK: A GoFundMe for Jajahira has been set up at https://www.gofundme.com/f/jajahira-the-wingstop-angel-in-need.