BRADENTON, Fla. - For Chaseedaw Gable and Antonio Johnson, Sunday brings church services as much as it does an appetite.

"We wanted to stop and get a quick bite," Gable recalled.

They brought 6-year-old Azeena and 2-year-old Antonio Johnson II to the WingStop on 1st Street in Bradenton. Gable was outside and both Antonios were inside.

"He is very energetic, he can run fast... Running around, jumping, he is a happy kid," Johnson said of his son. "Right when I am trying to get him, he slips up, hits his head right on the bench."

Little Tony went limp. You could say his dad did too.

"It was like he didn't have any feeling in his body," said Johnson. "I don't want to think about that."

As panic set in, someone was watching over them who knew exactly what to do. 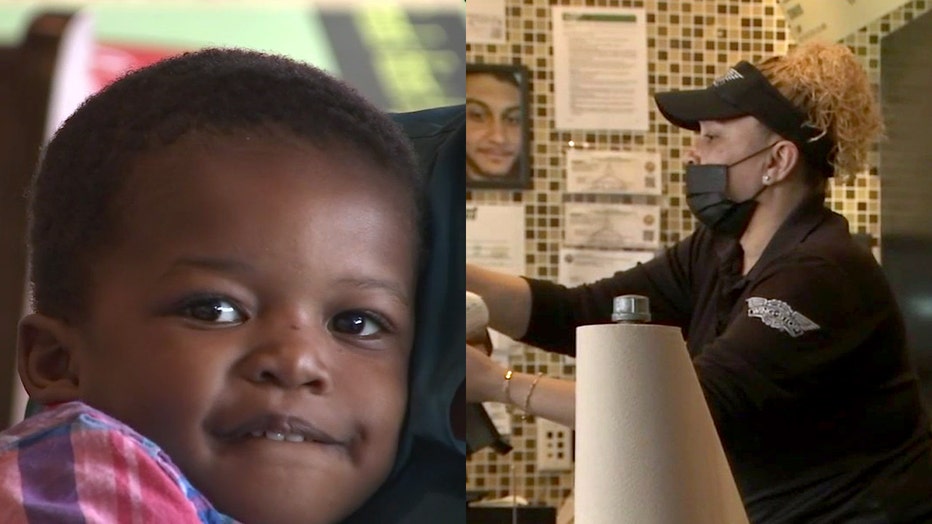 When 2-year-old Antonio Johnson II slipped and hit his head inside the WingStop in Bradenton, restaurant manager Jajahira Rosado put her training as a former hospital worker to work.

"The daddy grabbed the baby and I jumped the counter," said Jajahira Rosado, the restaurant manager. "He thought he was dead, and me too because he started saying, 'My baby!'"

A cashier called 911 while Rosado put her training as a former hospital worker, to work. She did a sternum rub, a precursor to CPR. Rosado estimates it took three minutes for him to come to.

"He opened his eyes and looked at his daddy," said Rosado.

"He started moving again and I was excited about that," said Johnson.

Johnson and Gable put Tony in the back of their car and headed for Manatee Memorial.

"He was born there, the last thing I wanted to do was bring him back to the place he was born for something life-threatening," said Gable.

Aside from the concussion, he got a clean bill of health and is back to his usual self. As for the grownups, they may never be the same.

"That's the purpose of being here," said Rosado. "We need to help each other."

"For me, the number one thing is people will help you," added Johnson. "They acted like my son was theirs."

Gable wants everyone to use this opportunity to familiarize themselves with CPR.