Options with and without Tropicana Field in redevelopment pitches

Friday was the deadline for developers to get in their proposals for the area and the city will decide which vision is right for the community.

One of the developers that submitted a plan was Unicorp National Developments out of Orlando. The company’s president Chuck Whittall said his team of architects and staff brainstormed for months.

"I spoke to our team and said, don’t think of this as a development. Think of this as building a community," said Whittall, who added that their design includes lots of green space and parks. "When you have a community, you have all aspects of living in the community. You have people who make a lot of money and people who don’t make very much money. So, we tried to design something that would be good for everybody." 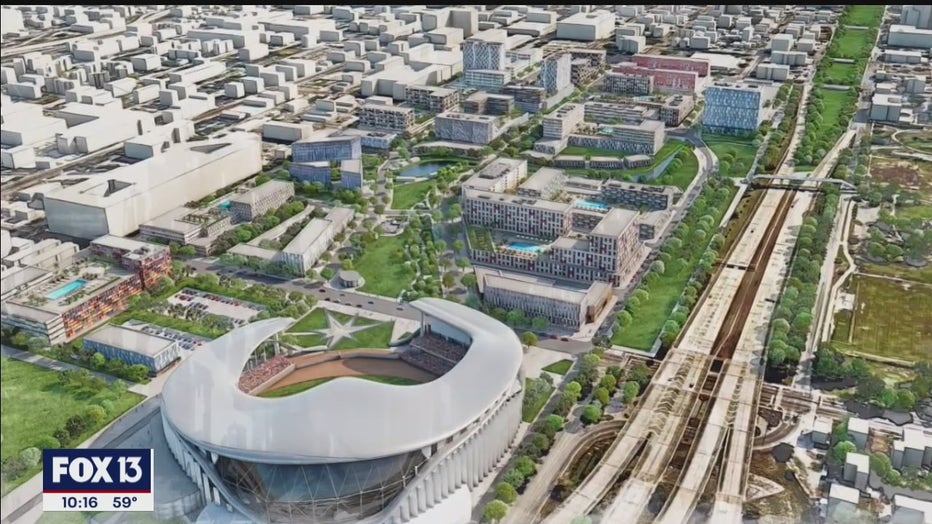 The design includes expanding Booker Creek to create a waterfront, a roller skating rink in the middle of a park, retail and office buildings, and a satellite college campus.

Whittall said they worked with local business owners and religious leaders to get ideas about what local residents wanted.

"We’ve even designed our [request for proposal] that we can help train people for jobs. We would put a requirement in the leases that the tenants had to train people and move them up. So, people can start at one level and possibly work through management and assistant managing," said Whittall.

Tropicana Field is currently home to the Rays and the baseball team’s future in the city is uncertain. A spokesperson for the Tampa Bay Rays said the organization is waiting to see what the progress on the proposals will be.

"We’d have music festivals inside the stadium, do different events inside the stadium, concerts and things like that," said Whittall. "It would stay active all the time because a lot of times these stadiums are dominant when games aren’t played, and it doesn’t benefit the community."

The city of St. Pete has choices, and the mayor plans to weigh all the pros and cons of each proposal, a city spokesperson said.

The city said it will post the proposals for the public as soon as staff finishes going through them. A spokesperson said there’s no deadline for the mayor to make his choice for Tropicana Field’s future.