Good Catch: Snook are on the move

Every Friday morning, Captain Dylan Hubbard of Hubbard's Marina joins Good Day to fill viewers in on his fishing forecast as we head into the weekend. Here is his fishing report for November 8, 2019.

MADEIRA BEACH, Fla. - Every Friday morning, Captain Dylan Hubbard of Hubbard's Marina joins Good Day to fill viewers in on his fishing forecast as we head into the weekend. Here is his fishing report for November 8, 2019.

Snook are definitely on the move at this point. With temperatures going lower, and water temperatures following the air temperatures, the snook are making their way into the rivers and bayous for Florida’s “winter” time.

The residential canals on the way into the back bays are great areas to find the snook hiding out in the shallow waters, sitting on that warmer dark bay mud under the docks, and around the structures. Around the passes, we are still catching snook but most of the ones in the passes are the small juvenile snook that aren’t as seasoned or smart as the wiser, bigger snook that have already moved further up into the bays. River mouths, start of the bayou and residential canal docks will be the best areas to find the bigger snook over the coming weeks. Especially at night, around the dock lights on the residential docks, the big snook are going to start loading up to ambush passing shrimp and other baitfish. 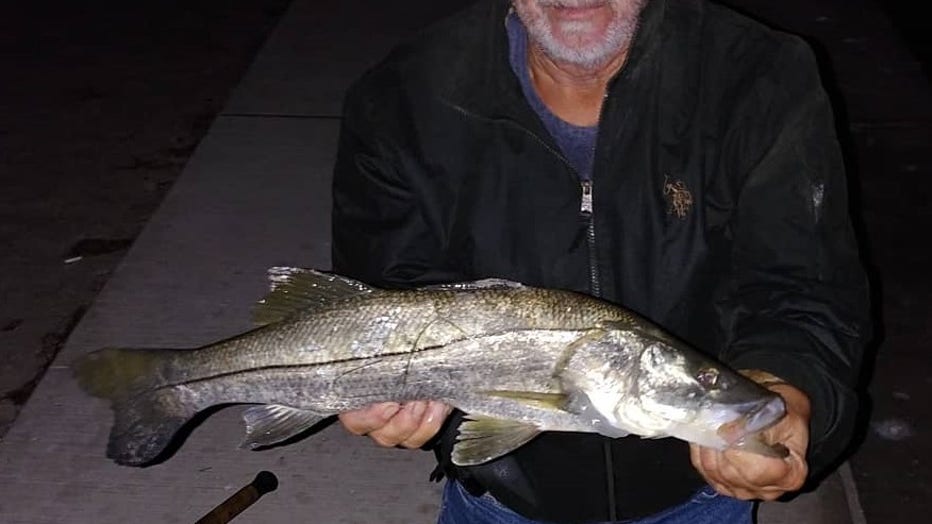 Lately, around the area, the white color soft plastic paddletail has been working really well for our pass anglers from the bridges, jetties and docks.

Redfish, like the snook, are on the move as well trying to avoid the cooler waters along the beaches and passes. We are seeing very active smaller 20-30 inch redfish around the flats and back country but the bigger fish are scattered and don’t seem to be feeding as well. They are mostly recovering from their spawning journeys and some are still out along the beaches -- heading back into the bays slowly. The small pinfish or greenbacks are great options for the redfish.

Trout are moving into their wintertime areas on the flats and they love some live shrimp, green backs or a slow-moving artificial lure like a DOA shrimp. These guys love the cooler waters and they will really be active and fairly large over the coming weeks as the waters continue to cool down. Look for the deeper flats around 3 to 4 feet on the high tide and about 1 to 2 feet on the low tides to be holding some nice sized trout in decent concentrations.

Typically, once you find one, there’s more in that same general area ready to feed too. At night, we are seeing lots of trout on the dock lights or bridge lights ambushing passing shrimp and baitfish. Lots of great action on them around the local piers, bridges and docks fishing the lights at night. During the day, the flats is where you want to be for the trout action.

Flounder bite is really picking up. We saw some big flounder caught this week around the area from Tampa Bay to the passes to the back bays and everywhere in between. The flounder are really becoming more aggressive and prolific. You can find them adjacent to structure hanging on the softer bottom waiting to ambush smaller pinfish, mud minnows, shrimp or greenbacks.

Slowly-moving artificials bouncing off the bottom is a great method to target the flounder too. These guys are right on the bottom and they are ambush predators. You have to have your bait on or literally just above within 4-6 inches of the bottom. They are great eating fish and fun to catch but take a little work to consistently catch. When working artificials for them, it’s a good idea to try it in a pool or the clear shallows first to make sure you are not raising the lure too high off the bottom out of the strike zone of a waiting flounder. DOA shrimp, DOA terror eyes, soft plastic paddle tails, soft plastic flukes, and even Nekid Ball Jigz work well for these great eating bottom feeders.

Sheepshead bite is also picking up like the flounder as our waters cool. They love the structures like bridges, docks, jetties, piers and anything that will hold barnacles, oysters, crabs or other crustaceans. My favorite bait for a sheepshead is a fiddler crab or a cut oyster but even small pieces of shrimp will work or a barnacle to get these guys to eat.

You can even scrape off some barnacles from the pilings you’re fishing around to get these guys hungry when targeting the sheeps. Oddly enough, these guys seem to flourish behind the fronts when the water is murky and stirred up. Unlike other species, that seem to shut off a bit directly behind a front, the sheepshead actually heat up.

The hogfish bite is going well near shore from anywhere from 30 to 70 feet. That’s where we are finding the majority of the cooperative hogfish. We have caught them a little deeper too, but you can find them more consistently and often in this depth range.

They love the live shrimp, fiddlers, rock shrimp or sand fleas on the lighter tackle. Around 20-30lb floro leader and around 3-4ot hooks with 1oz or less leads seem to be the best approach for those great eating hogfish.

We are seeing a great bite of the mangrove snapper and lane snapper especially right before the fronts. These guys cooperate well. This past week we had a big front blow in Tuesday night to Wednesday morning and those fish chewed the bottom out of the boat on the Tuesday 10-hour all day. We had nearly 400 snapper between the lanes and mangroves in the box after around 6 hours of fishing time with cut threadfins and live shrimp for bait. Around 70-100 foot seems to be the best area to target these fun to catch and great eating fish.

The red grouper bite went really well for us this past week too -- right before the cold front like the lanes and mangroves. We had a great catch of red grouper on a few different trips. The biggest red grouper was over 30 inches and was just about 15 pounds, which is a huge fish for the near shore waters caught on live pinfish with 60lb test and a 7ot circle hook.

We have seen some great action on the mackerel near shore too. The kingfish have been tougher but we are seeing them on the beaches or just off the beaches within 3-4 miles from shore seems to be the best area to find the kingfish chewing -- unless you get way offshore. 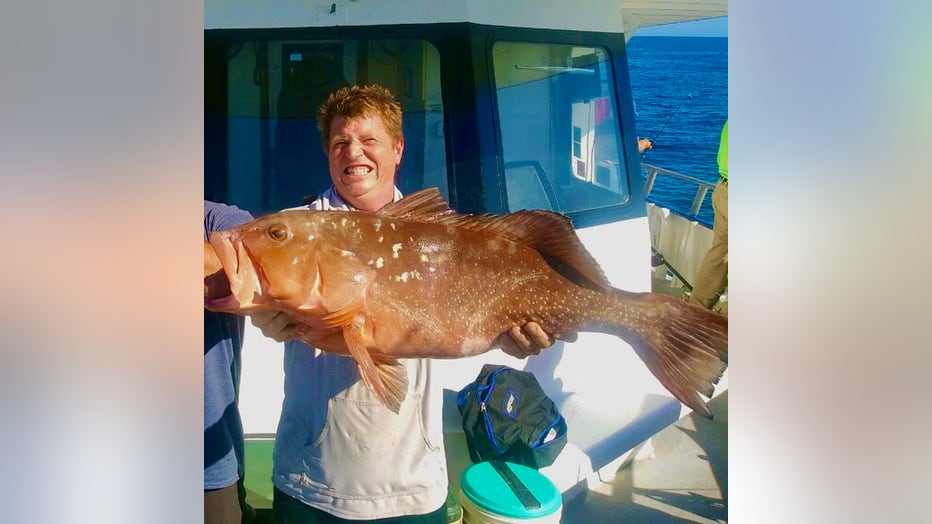 The gag grouper bite is really picking up for us offshore. These fronts have the gags chewing out there deeper from around 120-160 feet of water on the live pinfish, bonita strips, whole threadfins with the tail cut or other large live baits.

The bigger tackle is a necessity when targeting the gags because they will rock you up or break you off quickly if you aren’t tackled up and ready to put the hammer down when they bite.

The red grouper are spotty but they are biting too. They just seem to be less aggressive compared to the hungry and plentiful gag grouper right now. They are biting the same baits that were catching the gags on. You don’t need quite the same large tackle for the red grouper but 60lb test is a good idea. 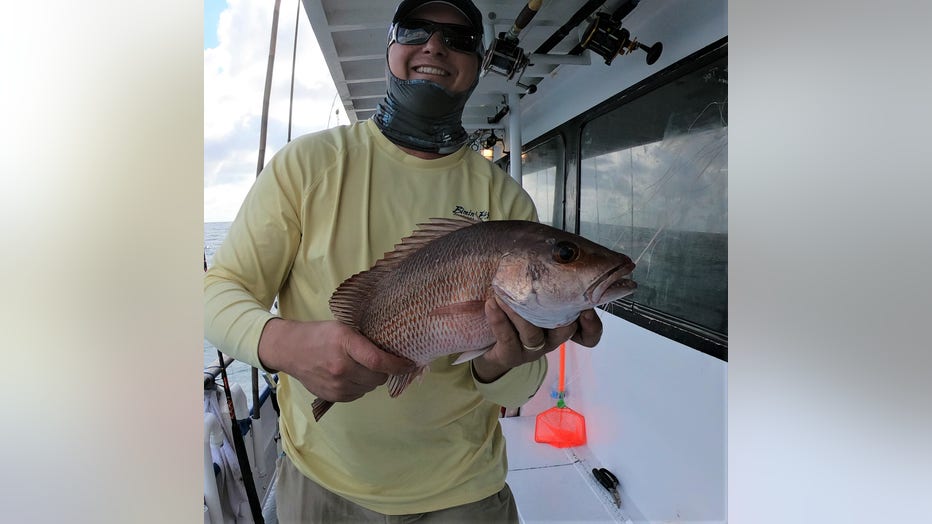 The big mangrove snapper are out there in good numbers too. Right around the same depth, we’re finding the gags the mangrove bite has been going well. They love the threadfin plugs on the double snell rig with 40-60lb test floro leader. I like using a little heavier leader this time of year in case you accidently hook a gag while targeting a mangrove, you have a shot at landing the gag if you’re using a little heavier leader.

A two speed reel helps give you even a better shot at the gags, because a high-speed snapper reel makes it really tough to get those gags to stop taking you to the rocks. With a two speed, you can hit a button and adjust your lever drag a little. It’s like you have a whole new reel in your hand to battle those gags off the bottom.

The pelagic bite has been pretty good this past week offshore, as the water cools we seem to get more and more blackfin tuna biting well for us. We are seeing them on the Rapala Xrap Magnum 30’s or 40’s and some of the nomad design DTX minnows too. We are catching some nice kingfish out there in the deep waters too, but mostly incidentally while knocker rigging or dropping dead bait to bottom on a fish finder rig and getting lucky on landing them without the wire. 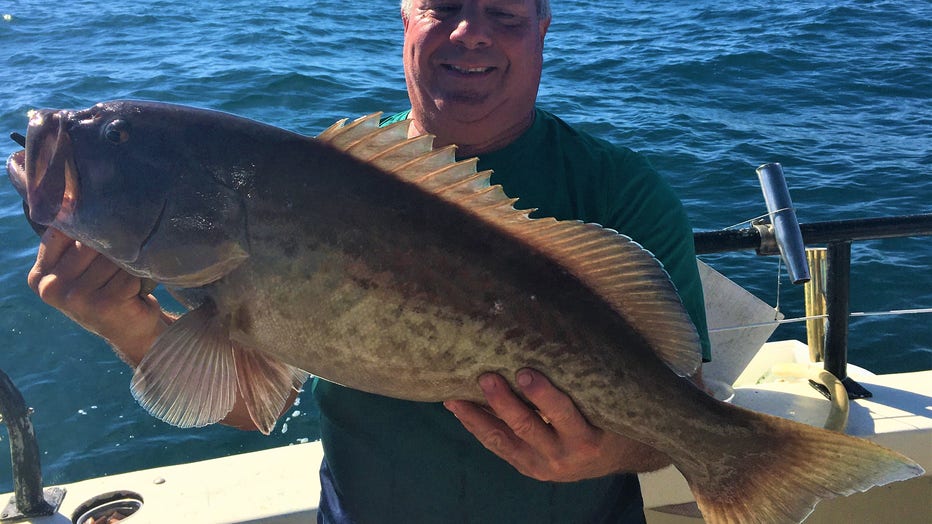