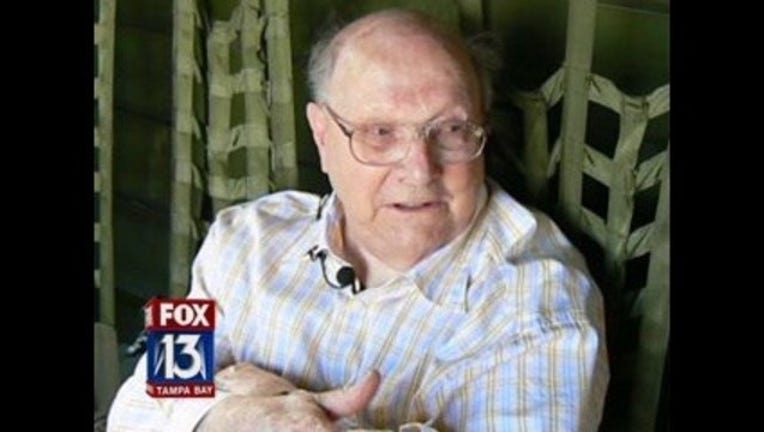 LAKELAND, Fla. - Thursday, Lakeland resident Foster Heath took a quick hop on a restored B-17 bomber.  The last time he was on board a Flying Fortress, he was bailing out over enemy territory during World War II.

Staff Sgt. Heath completed almost 15 missions as a tailgunner aboard the heavily armed bomber.  During his first 14 missions, he had some close calls.  But his number finally came up on a bombing run to Germany that ended with Heath bailing out and watching his plane spin into the Baltic Sea.

More than 60 years later, Heath -- now 88 -- climbed aboard the 'Aluminum Overcast,' a restored B-17G that's touring the country, offering aviation enthusiasts a chance to experience a piece of history first-hand.  The 15-minute flight over Polk County took him back to the war and brought him back to a time that he had once tried to forget.

"You have memories all the time," he said.  "When I first got home, I was going to try to forget all of that.  But I found out I could not forget it.  So I started talking about it.  So I talk freely now."

Perched in a jumpseat behind the right-side waist-gunner position, Heath provided a minute-by-minute account of a mission that sounded like a script straight from Hollywood.  It was a flight to southern Germany that had to be cut short when the plane's oxygen system cut out.

"That meant we had to abort our mission," Heath recalled.  "We turned around and went back across Germany and France, and boy, they were right on us.  We had to go down to 14,000 feet, and they were right on us at that range.  Flak was just rattling.  You could see holes popping throughout the plane."

A shell hit one engine and a second lost oil pressure, leaving the massive bomber only two engines on which to limp home.

"We threw out all of the extra equipment that we had that we could throw out.  The ball turret, we had the bolts already loose and we were about to let it go when the pilot called back and said, 'Don't let it go.  I think we can make the Channel.'  So that's what we were trying to do, to make the Channel so we wouldn't have to ditch.  So we made it across the Channel and he said, 'I think we can make our base.  It's a long try.'

"I think that's the mission where I got my knee skinned with a piece of flak.  It came through and I knew I was hit because I could feel the burning.  I called the pilot to tell him I was hit and he said, 'How bad?'  I was so scared, I said I didn't know.  Finally I got up enough courage to reach down in there and feel and I said, 'Well, I still got my knee. So that's good.' "

Sure enough, the plane -- and the crew -- made it back safely that day.  It's the kind of story shared by many B-17 crews who somehow made it back home after taking an unbelievable beating from enemy guns and shells.

"It was the one [plane] that would bring you back home when the others would dump you out," Heath added.

Heath's mood turned more somber as he recalled his time in a prisoner of war camp.  He spent 11 months as a POW, and was moved from camp to camp -- once by rail, packed in car without windows for days, and once by foot in a 50-mile march -- as the Russians got closer.

"That does something to you, being in prison," he offered.  "The Germans were supposed to abide by the Geneva Convention, which they supposedly did, but went through every loophole they could think of.  They didn't feed us right or clothe us or have any form of recreation or education opportunities, which they were supposed to have had."

Heath grew up in Fort Meade.  After the war, he returned to Lakeland and has been there ever since.  That's where the 'Aluminum Overcast' will be offering tours and flights this weekend.  Visitors to the Florida Air Museum can get a close-up look at the plane that helped defeat the Nazis, and Heath thinks it's something everyone should see.

"They should know something about what went on during that war, as well as any other war," he added.  "They should know what goes on and maybe be a little bit more vigilant and we won't have to have another one."