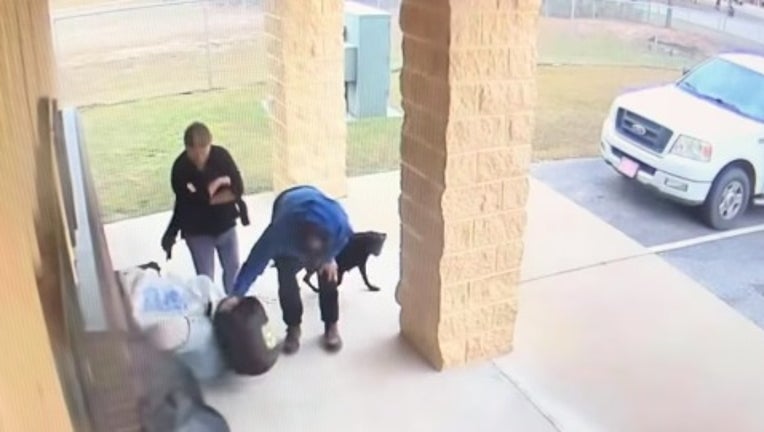 WALTON COUNTY, Fla. - Deputies say a Florida couple was caught on security camera dumping a momma dog and 11 puppies outside a closed animal shelter less than a week before Christmas.

"This video is hard to watch," the Walton County Sheriff's Office wrote on Facebook.

The sheriff's office says just before noon on Sunday, a man and woman could be seen on surveillance video pulling up to the Walton County Animal Shelter and got out of a white F-150 along with a black dog.

"After sifting through donations left at the front of the building, the man places a box next to the front door and returns to the back of the truck to close the tailgate. The woman follows and the two leave. It's at that moment when the dog realizes she's been abandoned and left behind."

The shelter is closed to the public on Sunday's, but a staff member was inside and saw the dog peering through the windows.

"After investigating, they realize there is movement in a small box left by the door - with 11 puppies inside."

The puppies and their momma were quickly brought inside and given shelter.

The sheriff's office wants to remind the public that dumping animals is illegal and the individuals could face criminal charges. They say if you have an animal that you cannot care for, call Animal Services to provide a time for intake.

"These dogs have clearly had a rough 24 hours. Abandoned just days before Christmas and left out in the cold."