It's official: Florida Gov. Ron DeSantis has filed to run for reelection next year.

TALLAHASSEE, Fla. - In Florida, for the first time in modern history, registered Republican voters outnumber Democrats. Republican Gov. Ron DeSantis is heading into a reelection campaign buoyed by a national profile and a cash reserve unmatched by any Democratic challenger. And Republicans control virtually all of state government.

When Democrats met recently for their annual strategy conference, Annette Taddeo, a Democratic state senator running for governor, said there was a clear sense of the difficulties ahead for the party.

"Of course this fight will not be easy, but it’s about so much more than any one of us, and as Florida Democrats, we have lost so many times that donors and pundits have given up on us," Taddeo said. But, she added, "I believe and I know we can win if we create the coalition of voters that are needed to win in a state where these decisions are made by 1% or less."

With the 2022 election approaching, Democrats are confronting a host of disadvantages as they work to rebuild campaign networks and try to reignite excitement in their party. There is a growing worry that big donors and the national wing of the party may consider Florida to be GOP territory after years of bruising losses.

"In the current state of American politics, and especially in a state with as many major television markets and population centers, you’re going to need more help," said state Rep. Evan Jenne, a Democrat. "It’s not as if Floridians can’t be swayed one way or the other. We need more coordination with the national party."

The Democratic Governors Association has bristled at assertions that it has ceded Florida to Republicans. A spokesperson said the group is building its general election infrastructure, with investments in media and messaging. The Democratic National Committee is stepping up organizing efforts in the state.

"Florida is a competitive battleground in 2022, and the DGA has made defeating DeSantis a priority. That’s why we’ve already started investing in Florida and are working with our candidates to ensure we have what it takes to take on DeSantis next fall," said Marshall Cohen, political director for the governors group.

Florida Republicans are coming off a string of victories that include Donald Trump’s two presidential campaigns, and have been aggressive in organizing at the local level, especially as DeSantis has gained in popularity due to his opposition to coronavirus lockdowns and mandates.

"We did not dismantle any operations; to the contrary, we continued to build on them," said Helen Aguirre Ferré, executive director of the state Republican Party. "The power is from the bottom up. It’s not top down, and that continues to be our big commitment." 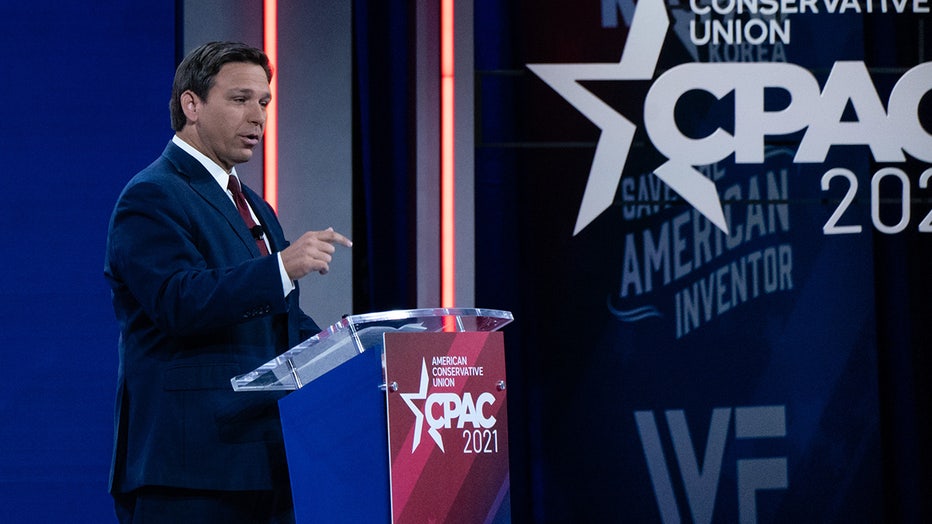 Some have noted that there may be hesitance for Democratic donors to pour money into Florida given the party’s track record — most recently in 2020, when Trump carried the state and Republicans gained additional seats in the statehouse and in Congress, despite a $100 million infusion by former New York City Mayor Mike Bloomberg.

The most up-to-date figures from the state election agency show 5,118,357 registered Republicans and 5,114,039 Democrats. At the same time, the number of unaffiliated voters has swelled to 3.8 million. DeSantis won office in 2018 by a margin of about 32,000 votes after a key endorsement from Trump, in a year when Democrats outnumbered Republicans by more than 250,000 registered voters.

"Florida voters are choosing the Republican Party over the Democratic Party because we value freedom and liberty and reject Democrat-led government control. This milestone moment reflects years of hard work, combined with the success of our common-sense conservative policies," DeSantis said in an email announcing the voter registration numbers.

Still, Republican strategist Susie Wiles said it’s important for the GOP to continue to organize and be bullish about registering voters.

"The assumption that it’s a reliably red state is one you should never make because the state is so dynamic, so many new people moving in and out, and it’s just a very diverse population base that’s changing all the time," said Wiles, who ran Trump’s campaigns in Florida. "I just don’t think we as Republicans should ever stop, and the good news is that we haven’t over the last decade."

Steve Schale, a political strategist who helped Democrat Barack Obama win Florida twice in his White House races, said Democratic registration efforts have mostly centered around presidential races. But Schale said the party could benefit from sustained organizing, particularly in Hispanic communities in South Florida that helped Trump win Florida last year by an even larger margin than in 2016.

"Registration in its own right is an organizing tool," he said. "If your party’s out in communities, particularly in communities where we need to do better, building the kind of relationships in communities you have to build to successfully register voters, it’s going to have a kind of double-win impact."

Manny Diaz, chair of the Florida Democratic Party, acknowledged that Democrats had not been as aggressive in registering voters in previous years, though he added, "We have more people than we’ve ever had on the ground as of right now." He also disputed the idea that the national party was making the state less of a priority and he played down the shift in registered voters as a record-keeping "shell game" of designating Democrats as inactive voters.

"The last time we had any kind of statewide organization here was during the Obama campaign, in ’12, but then he got elected, and again we broke down the tents and didn’t maintain that kind of organization for the last 10 years," he said. "We’re not going to be outworked by the other side this year, I promise you that."