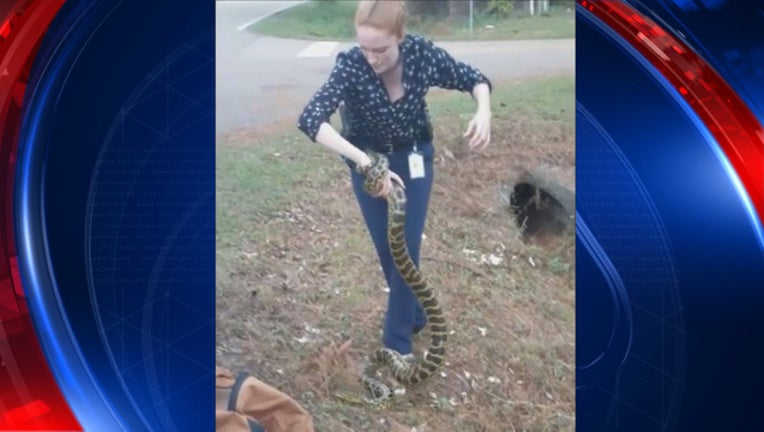 TALLAHASSEE (FOX 13) - A 9-foot anaconda was captured by a Leon County detective, who happened to have the experience to do so.

On Wednesday, Detective Emily Shaw responded to the east side of Leon County since she knows how to hand exotic snakes, like the yellow anaconda.

She first used a large stick to position the reptile for her to grab it by its tail-end. Shaw then slowly drags it to a duffel bag as the anaconda tries to curl its tail around her hand. There were a couple of times where the anaconda appears to try to strike her.

But Shaw won the brief battle. She managed to drag it into the opening of the bag, and zip it shut. Someone who captured video of the ordeal ended the saying, “That is crazy!”

The sheriff’s office shared the video on the agency’s Facebook page. They believe the 9-foot reptile was a pet that either escaped or was released.

“If you own an exotic pet- please be responsible. Make sure their cages are completely secure and if you decide you no longer want it, DO NOT release it into the wild. Instead, contact Florida Fish and Wildlife Conservation Commission,” the agency wrote in its post.

FWC offered the following tips to exotic pet owners: If you can’t care for an exotic pet anymore, don’t set it free - that’s illegal, and your pet will likely die without care from you.