In addition, the $101.5 billion budget for the next fiscal year includes $50 million to raise Florida teachers’ annual salaries to a base minimum of $47,000. He vetoed $1 billion in federal money for an emergency response fund he said had strings attached that made it unusable.

The billion dollars in federal money was supposed to go to an emergency response fund set up by the Legislature. DeSantis said that while he supports such a fund, the federal government set conditions on it that didn’t make sense for the state.

Part of it was because the money would come in the form of grants and the state would have to go through the normal bidding process to spend it.

"In an emergency situation, you don’t have the time to do the normal procurement. You’ve got to do this very quickly. It would defeat the purpose to try to use it for emergency response if you have to go through all that bureaucracy," DeSantis said.

He said the state also wanted to use the money to meet future emergency needs, and the federal government said it couldn’t be used for those purposes.

"When you started to see the fallout from COVID last spring the forecast for Florida…those predictions were dire," DeSantis said before signing the budget from a New Smyrna Beach restaurant. "Well, I’m happy to report that once I sign this budget, we’ll be signing a budget the responsibly supports our men and women in law enforcement, K-12 teachers…but does so in a way that has the lowest per capita tax burden than any state in the country."

"If you said that a year ago," he said, "no one would believe that was possible."

The massive budget also includes about $96 million to provide home- and community-based services to more people with developmental and intellectual disabilities: and $100 million to clean up an old phosphate plant in Manatee County that drew concerns recently about a potential environmental catastrophe.

Also, the budget includes money for such issues as Everglades restoration, addressing effects of sea-level rise and raising the minimum pay of state workers to $13 an hour. 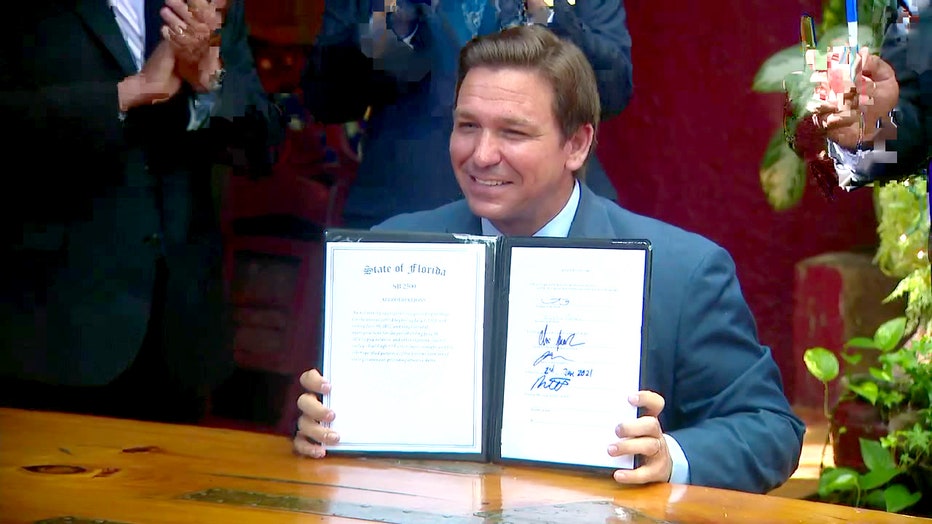 Last year, DeSantis vetoed a billion from the budget and ordered state agencies not to spend all the money appropriated to them. There were dire predictions of budget deficits, especially since Florida has no income tax and heavily relies on tourism to pay the bills.

The Legislature expanded the sales tax holiday on school and hurricane preparation supplies from seven to 10 days.

What you need to know about tax free weeks in Florida

With hurricane season around the corner, it's time to stock up on essentials.

Lawmakers went even further this year and declared there will be a sales tax "Freedom Week" that will eliminate sales tax on things like museum and music season tickets, fishing and camping gear, kayaks, and surfboards.

The budget will go into effect July 1.