The Tampa Bay Lightning's national anthem singer has become a familiar face and voice around Tampa Bay. Other than the players, Sonya Bryson-Kirksey is now, arguably, the most popular person on the ice at Amalie Arena.

TALLAHASSEE, Fla. - Florida lawmakers moved forward Tuesday with a plan that would connect playing the national anthem at sports events to state and local dollars.

The Senate Commerce and Tourism Committee backed a proposal (SB 1298) that would require Florida professional sports teams receiving government money to play the national anthem before every home game.

When asked by Sen. Victor Torres, D-Kissimmee, if any teams don’t play the anthem, bill sponsor Joe Gruters, R-Sarasota, acknowledged he didn’t know of cases in Florida where "The Star-Spangled Banner" wasn’t played before games and other events.

"This is just to make sure, as a proactive approach, that people continue to play it," Gruters, who doubles as chairman of the Republican Party of Florida, said.

In voting against the bill, Sen. Bobby Powell, D-West Palm Beach, called the proposal an overreach into private enterprise that appears to have little to do with the anthem.

"We're pushing ourselves out there as a free state. All about freedom. All about limited government. However, you get to pick and choose when you limit government," Powell said after the meeting. "In this instance, I think it kind of borders on government overreach. It’s the opposite of what I've been hearing. And we just need to be consistent in our messaging, especially if it's being pushed by one particular political party. Just be consistent." 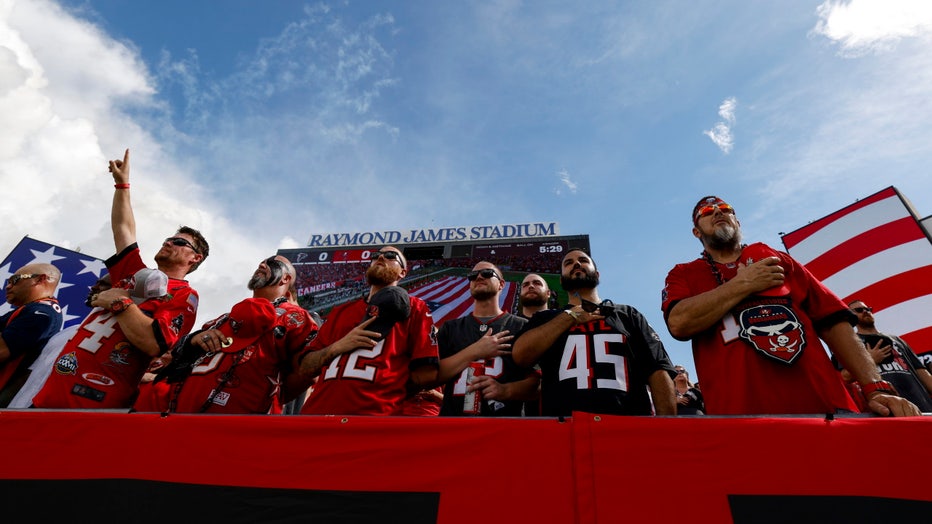 General view of fans standing during the National anthem prior to the game between the Tampa Bay Buccaneers and the Atlanta Falcons at Raymond James Stadium on September 19, 2021 in Tampa, Florida. (Photo by Douglas P. DeFelice/Getty Images)

The proposal, which drew no public comment, mirrors a Texas law, dubbed the Star-Spangled Banner Protection Act, which went into effect in September.

Dallas Mavericks owner Mark Cuban in November 2020 instructed his team to stop playing the national anthem before home games, an action that came after a number of players breached NBA rules by kneeling during the anthem in support of the Black Lives Matter movement and to protest against systemic racism in the U.S.

Cuban’s directive went unnoticed for a month, but the resulting uproar from conservative pundits quickly resulted in the Texas law that Gruters seeks to emulate.

Florida’s measure would prohibit government agencies from entering agreements with professional teams without written verification that the anthem would be played.

Gruters’ proposal seeks to ensure the anthem would be played before such things as preseason, regular-season and post-season professional baseball, basketball, hockey, soccer and football games. Also, the requirement would apply to NASCAR and IndyCar events held in venues with at least 75,000 permanent seats and professional golf tournaments.

Failure to play the anthem could lead to teams or venues being required to repay government money they received.

A similar House bill (HB 499), filed by Sen. Tommy Gregory, R-Sarasota, has not been heard in committees as the annual legislative session entered its second week.