TAMPA, Fla. - Rep. Kathy Castor went back into the Capitol after the siege and saw the smashed windows of the speaker's lobby, which just hours before was where a rioter was killed by Capitol Police.

"How did they know how to get into some of the leadership offices?" she asked on Monday.

The Tampa Democrat's caucus announced Monday they will try to impeach the president for the second time, this time, the article says President Trump incited an insurrection.

"What a serious betrayal of this country by Donald Trump," said Castor. 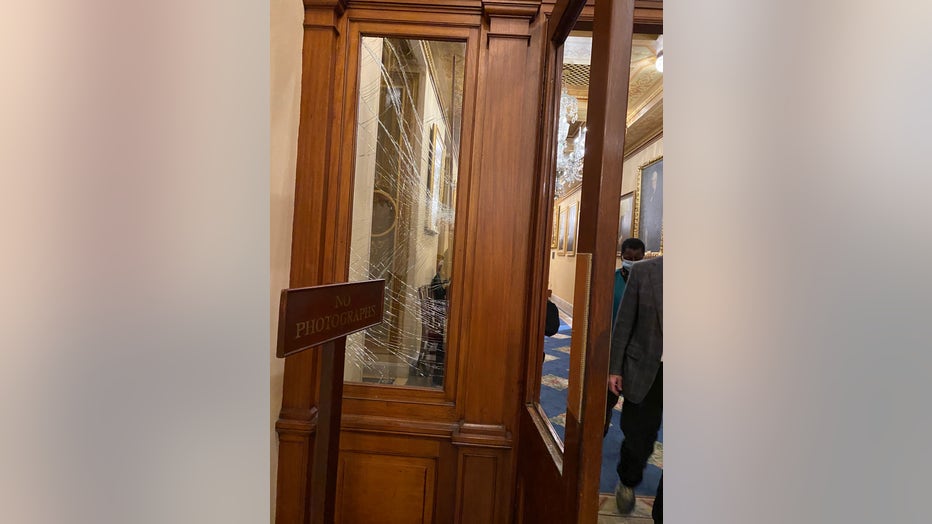 Photo taken by Rep. Kathy Castor outside the Speaker's Lobby in the Capitol

House Democrats want him booted from office now, banned from ever running again, and from receiving post-presidential benefits.

The article says Trump's speech just before the riot, where he said, "if you don't fight like hell, you won't have a country anymore," "encouraged and foreseeably resulted" in what happened.

"I do not know what other best evidence you would need than that," said Rep. Charlie Crist. "Words matter and they can incite."

But Republicans who criticized the insurrection, like Rep. Vern Buchanan of Bradenton, say impeachment is unnecessary.

PREVIOUS: Floridians, including a Riverview man, among those arrested in U.S. Capitol riot

In a statement to FOX 13, he said, "Impeaching President Trump a week before he leaves office is not going to calm the waters or move our country forward. In fact, it will do the opposite. We need to put the 2020 election behind us and work on the challenges ahead."

The smiling 'lectern guy' seen in a now-viral photo taken during this week’s invasion of the U.S. Capitol was arrested in Pinellas County.

There are calls for an investigation into why the ranks of Capitol Police were so thin and why backup didn't quickly arrive.

And Capitol Hill will be on edge at least until the transfer of power to Joe Biden is complete.

RELATED: Florida governor: ‘It doesn't matter what banner you are flying under, the violence is wrong’

"How can you see what happened last Wednesday and not have concern unless your head is in the sand?" asked Crist.