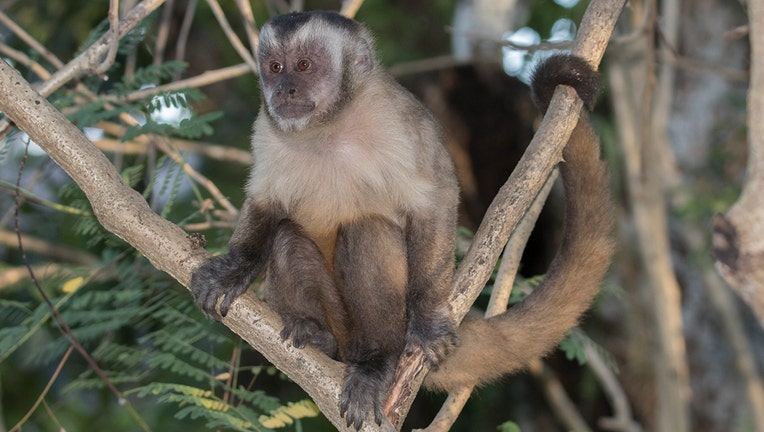 TAMPA, Fla. - A Central Florida man known as The Monkey Whisperer pleaded guilty after federal officials say he illegally sold a capuchin monkey "to a celebrity client in California," who PETA identified as entertainer Chris Brown.

Jimmy Wayne Hammonds, of Parrish, pleaded guilty to conspiracy to violate the Lacey Act and three counts of violating the endangered species act, according to records from the United States District Court, Middle District of Florida, Tampa Division.

His plea agreement says Hammonds breeds and sells exotic wildlife, but when he sold a capuchin monkey to an unlicensed California resident between 2017 and 2018, federal officials intervened.

It started in September 2017. Records show Hammonds was in contact with three Californians, one of whom was an unlicensed wildlife transporter, about the monkey.

Hammonds got $12,650 for the capuchin as well as expenses for transporting it to California, the documents say. The transporter took the monkey to Nevada and met up with an associate of the buyer, who PETA says was Brown.

During the second week of October 2017, the monkey was delivered to its new owner in California, but by January 2018, law enforcement showed up to confiscate the animal.

The next month, law enforcement officers say Hammonds gave them false documents related to the sale of the monkey.

Hammonds pleaded guilty to violating the Lacey Act, which says it’s illegal to "import, export, transport, sell, receive, acquire, or purchase any wildlife that were taken, possessed, transported, or sold in violation of any law or regulation of any state or the United States."

Furthering Hammonds’ legal troubles, he was accused of and pleaded guilty to three violations of the endangered species act for selling or offering to sell cotton-top tamarins to people in Wisconsin, Alabama, and South Carolina between March 2016 and October 2017, according to the plea agreement.

Hammond was charged with violating the Lacey Act’s trafficking code, the Lacey Act false record code, and witness tampering, but he did not plead guilty to those charges as part of the agreement.

According to the US Department of Justice says Hammonds faces a maximum penalty of eight years in federal prison. A sentencing date has not yet been set.

Animal rights organization PETA issued a statement after the plea deal was announced, saying it asked the United States Department of Agriculture to prevent Hammond from being allowed to continue doing business.

"Now that Florida-based exotic-animal dealer Jimmy Wayne Hammonds (aka "The Monkey Whisperer") has pleaded guilty to federal charges related to the illegal sale and transport of primates—including his notorious sale of a capuchin monkey to singer Chris Brown—PETA has just sent a letter to the U.S. Department of Agriculture (USDA), urging it to revoke his federal Animal Welfare Act (AWA) license. Without the license, Hammonds could no longer legally sell exotic animals for the pet trade," PETA said, in part.