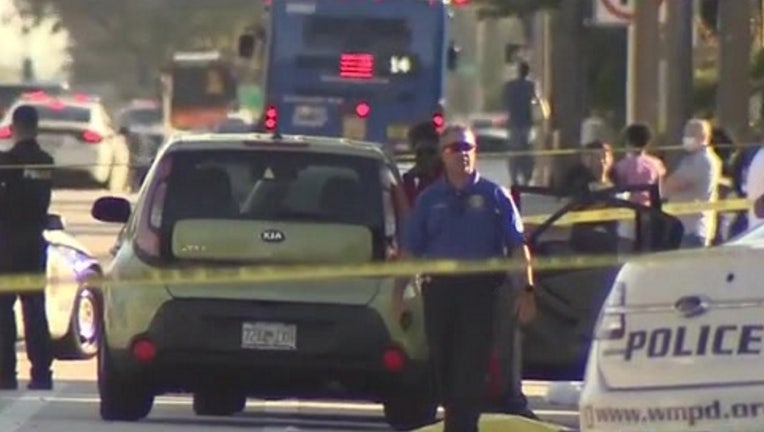 WILTON MANORS, Fla. - Two children were killed and another four children were hospitalized with severe injuries when a car plowed into them and fled the scene in South Florida on Monday, authorities said. Investigators say they've found the vehicle involved but are still searching for the driver.

The Broward County Sheriff's Office said the crash happened just before 3 p.m. Monday outside an apartment building in Wilton Manors, near Fort Lauderdale.

Investigators identified the children who were killed as 5-year-old Kylie Jones and 6-year-old Andrea Fleming. They were pronounced dead at the scene.

The sheriff's office said a 2009 Honda Accord sedan, driven by an unknown man, was driving southbound and approaching a Broward County public transit bus that had stopped to drop off a passenger.

They said the driver of the Honda didn't allow the bus to merge and instead tried to speed around it, driving up onto the sidewalk where he hit multiple children.

The driver then accelerated and fled the area.

"By the time I looked up, I saw him going around the bus and I see him hit the damn kids," witness Shaunta Adams told the South Florida Sun Sentinel. "I jumped out my car, my car was still running, I ran up and saw the first girl on the ground. I knew she was dead. I go to the second kid and I see him dead."

Wallene Johnson, who lives across the street, came outside when she heard screaming and saw two bodies in the parking lot and another child lying on the ground down the road.

"How can you sleep?" she told the Sun Sentinel. "And they’re babies. They won’t be going back to school."

Steven Gollan, a battalion chief with the Fort Lauderdale Fire Department, said it was a horrific event any time of the year, but especially right after the holidays.

"This is a heartbreaking evening for everyone, for family, friends, and for the first responders that responded to the scene," Grossman said.

The crash scene was so devastating that even first responders were provided with grief counselors, according to WSVN.

A description of the vehicle was released among law enforcement agencies, and the vehicle was located nearby in Wilton Manors. However, investigators have not yet found the driver who was behind the wheel.

Anyone with information is urged to call Broward County Crime Stoppers at 954-493-TIPS.