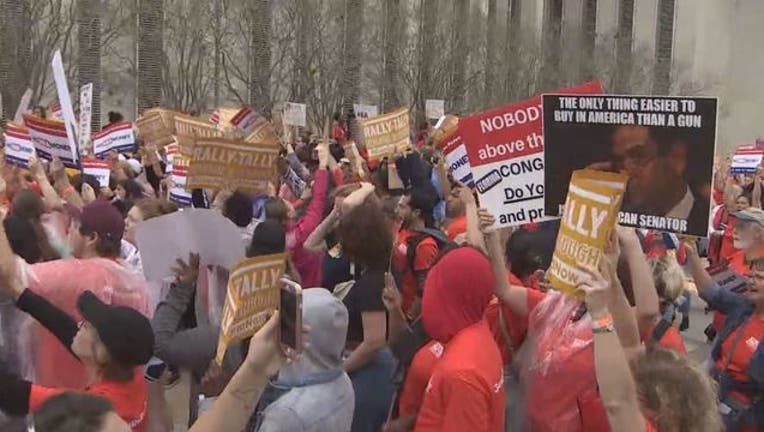 The House in a 67-50 vote approved the proposal (SB 7026), after the fathers of two slain students watched hours of floor debate from the House gallery. The Senate had earlier passed the measure, which now goes to Gov. Rick Scott.

Andrew Pollack, whose 18-year-old daughter, Meadow, was among the students killed on Feb. 14, called the bill “the first step in enhancing the safety and security of our schools,” and, speaking for the 17 families, urged Scott to sign it into law.

“We thank the House and Senate for voting in favor of protecting our children, but more needs to be done and it’s important for the country to unite in the same way the 17 families united in support of this bill,” Pollack, reading from his cell phone, told reporters after the House vote Wednesday evening.

“On a personal note, my precious daughter Meadow’s life was taken, and there’s nothing I can do to change that. But make no mistake, I’m a father and I’m on a mission. I’m on a mission to ensure that I’m the last dad to ever read a statement of this kind. If you want to help me, and keep my children safe, I want you to follow me, because there’s strength in numbers, at remembermeadow.com,” he said.

Wednesday’s vote came after days of charged debate in the House and Senate, and after weeks of even more emotional advocacy by parents, students, teachers and others from the Parkland school and neighboring communities.

Rep. Jared Moskowitz, a Coral Springs Democrat who graduated from Marjory Stoneman Douglas High and served on the Parkland City Commission, gave a detailed account to a rapt chamber of the bloody scene he encountered when he and other lawmakers arrived at the school hours after the Valentine’s Day massacre.

Moskowitz broke down describing how his 4-year-old son’s pre-school teacher was giving him writing lessons when her daughter, Jamie Guttenberg, was shot dead at the high school.

He acknowledged that the bill did not go as far as many would like in imposing new gun restrictions, but he urged his colleagues to support it.

“This bill is necessary, but it’s not sufficient. It’s not enough. When major corporations around this country are ahead of us, we are behind. We should be leading, not following,” Moskowitz said.

He chided House members who throughout the day called the vote on the bill a difficult decision.

“This isn’t hard. Putting your kid in the ground is hard. This is a button. … Push the green button,” Moskowitz concluded, referring to the button for “yes” votes.

The $400 million package includes $69 million for early mental health screening and services, $97 million for school resource officers, $98 million for school-hardening grants, and $25 million to raze and rebuild the freshman building where the shooting spree occurred.

The bill also includes more than $67 million for a controversial program that has overshadowed the other elements of the bill: the “Coach Aaron Feis Guardian Program,” named after an assistant football coach who died after using his body to shield students from a hail of bullets from the AR-15 semiautomatic rifle that 19-year-old Cruz was charged with using to wreak havoc on the school he once attended.

The program, which was rebranded from the “school marshal” program to the “guardian” program, would allow specially trained school personnel, who are deputized by local sheriffs, to bring guns to schools. Schools boards and sheriffs would have to agree to implement the program for it to go into effect.

Black lawmakers fear the program could endanger minority students, who are more likely to be punished at school and could be unfairly targeted in an emergency, as could armed school personnel who are “black or brown.”

The bill is dangerous “because there is an implicit bias that exists against boys and girls of color,” Stafford said.

“I’m afraid that in an emergency situation, a black or brown student who may be running down the hall to get away like everyone else, who reaches for his or her cell phone to call their parent, may be seen not as a student, but as a shooter,” she said.

Black lawmakers also objected that the proposal fails to address gun violence that they maintain has disproportionately affected their communities.

“While there may be kids who are in fear of their lives when they’re going to school, and we don’t want that, I propose to you there are countless of our kids who are scared to step out of their front door,” said Rep. Al Jacquet, a black Democrat from Lantana “I have nothing to go to those families who lost their children … to say I’ve done something about gun violence.”

On the other end of the gun-control spectrum, Republicans are being targeted by gun-rights groups, including the powerful National Rifle Association, that oppose provisions in the bill that would raise the age from 18 to 21 and impose a three-day waiting period for the purchase of rifles and other long guns.

The measure would allow law-enforcement officials to seek court orders to seize guns from people who have shown they could be a danger to themselves or others.

But House Rules Chairman Jose Oliva, the bill sponsor, said raising the age for the purchase of rifles, an age already required for handguns, treats all weapons equally.

“This is not an infringement upon your right to bear arms. This is a judgment call about when you should be able to have that right,” said Oliva, a Miami Lakes Republican slated to take over as speaker in November.

If signed into law by Scott, the legislation would impose the first gun restrictions in Florida in nearly two decades.

The school-safety package, which quickly morphed into a debate about guns, overshadowed other business in the final days of the legislative session.

Students, parents and teachers flooded the Capitol, pleading with the Legislature, and Scott, to take action. Many Douglas High student survivors demanded a ban on assault-style weapons, along with a hike in the age to purchase rifles.

Lawmakers on both sides of the aisle have been inundated by emails and phone calls from opponents and supporters of the measure.

But supporters of the proposal, including the victims’ families and Parkland Mayor Christine Hunschofsky, called the proposal an important first step.

After nearly eight hours of debate, Oliva addressed the concerns about guns, beginning with the lack of an assault-weapons ban.

Oliva said handguns were used in the “great majority” of mass shootings after a federal ban on assault weapons, which has since expired, went into effect.

“But the rhetoric is something that makes people feel that you didn’t do anything,” Oliva said. “This is a deranged person that caused it. So we looked at it and say, what can we do about every step along the way.”

Scott has not said whether he will sign the measure, but he has said he opposes the three-day waiting period and is against arming teachers.

The Senate earlier this week watered down the guardian program, excluding teachers who “exclusively” work in the classroom from participating. But teachers who have additional duties, such as drama or track coaches, would be eligible.

Scott called the revised guardian program “a step in the right direction,” and said he would read the bill when it makes it to his desk.

“My goal is this never happens again in our state,” Scott, who will have 15 days to act on the bill after he receives it, told reporters Wednesday. “I’m going to review the bill line-by-line, and the group that I’m going to be talking to, the group that I care the most about right now, because it impacted them so much, is the families.”

Scott reiterated his opposition to “arming teachers,” saying he believes “we ought to be increasing our law enforcement presence.”

“I want law enforcement presence at all of our schools. So that’s what I’m going to focus on,” he said.