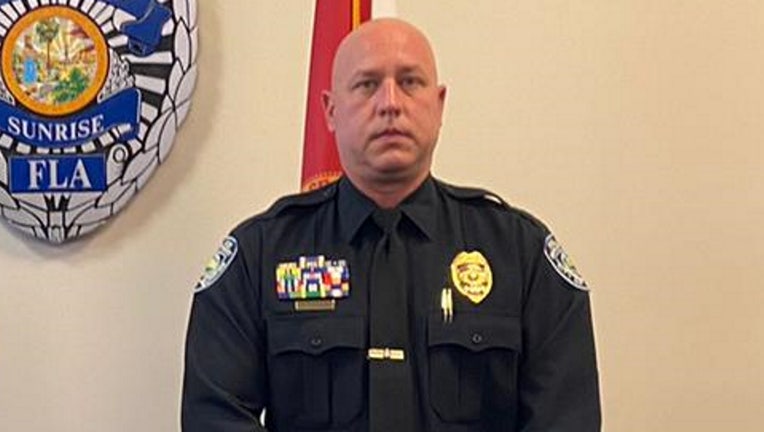 SUNRISE, Fla. - A South Florida police sergeant who was recorded grabbing a colleague by the neck when she tried to deescalate a situation involving a suspect is under criminal investigation, officials said.

Bodycam video showed a suspect had been handcuffed and placed into a police cruiser when Sunrise police Sgt. Christopher Pullease could be seen pointing pepper spray at him.

When an unidentified female officer saw the pepper spray, she ran over and pulled Pullease by the belt away from the suspect, the video showed.

That's when Pullease could be seen turning and putting his left hand on the officer's throat before pushing her back toward against another police cruiser.

"This is a result of criminal allegations that have been uncovered due to the internal affairs investigation. The Sunrise Police Department is working in conjunction with the Broward State Attorney’s Office during this criminal investigation."

Sunrise Police Chief Anthony Rosa said the officer who stopped Pullease from using pepper spray on the handcuffed suspect did the right thing.

"I'm very proud of this police officer. She took some definitive action," Rosa told WSVN. "I can only imagine what she must be feeling. She's a newer officer, and he's a very senior sergeant."

When asked about his reaction to the bodycam video, Rosa said, "I find this behavior to be disgusting. I think the video speaks for itself."

The 21-year veteran of the department had been placed on desk duty five days after the Nov. 19 incident.

Pullease has also been suspended with pay pending the outcome of the investigation, the agency said in a statement.