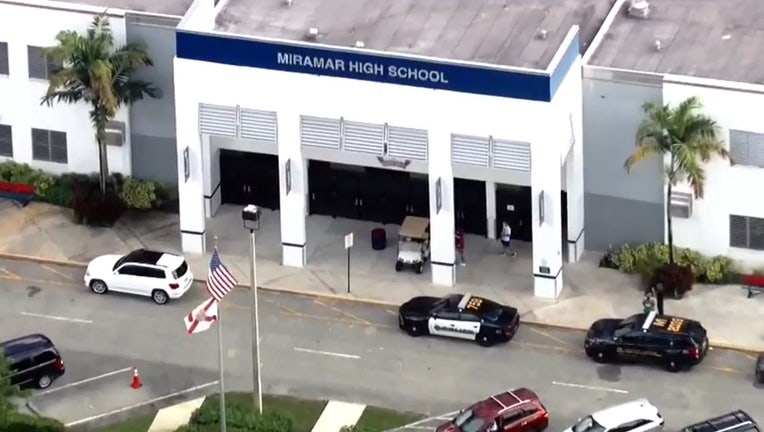 MIRAMAR, Fla. - A 16-year-old at a South Florida high school was arrested Friday morning after authorities found a loaded firearm in a small bag, police said.

The junior at Miramar High School was detained and searched due to his demeanor and for having a small bag with him that wasn't allowed due to testing in classrooms on Friday, said Miramar police spokeswoman Tania Rues.

Authorities found the loaded handgun and charged him with possessing a firearm on school grounds. The student isn't cooperating with detectives, and investigators don't yet know why he was carrying the gun, she said.

Investigators have not found any evidence of threats posted online by the teen, and it's not clear whether this case had anything to do with the TikTok threats, which prompted other schools in Broward County, the nation's sixth-largest district, to lock down their campuses.

The TikTok threats represent an attack on the American education system, interim superintendent Vickie Cartwright said. Earlier this week, Broward's school board approved a $26 million settlement to victims of the mass shooting at Marjory Stoneman Douglas High School who accused the district of failing to do enough to prevent the massacre.

"We are under attack by a social media platform that will not intervene when it is necessary," Cartwright told a news conference on Friday. "I’m asking for our federal government at this point in time to intervene. We need help. I cannot fathom that any other country would allow this type of attack to be occurring on their education system."

Plantation South High School, just outside Fort Lauderdale, went into Code Red — the highest level of alert — on Friday morning after reports of someone being on campus with a gun, Plantation police said. A gas leak was also reported at the school.

Parents in nearby Cooper City were notified that Pioneer Middle School remained on Code Yellow on Friday "out of an abundance of caution." An email from Principal Robert Pappas said they were working with law enforcement to "ensure the safety of students." The school was on a Code Yellow lockdown on Thursday for similar reasons.

Officials in Miami-Dade County notified parents via Twitter that they were aware of "general social media" threats and planned to increase law enforcement at schools on Friday. The statement did not specifically mention the Tik Tok threat.

Both counties have experienced a wave of student arrests over online threats of violence at schools this month.