A rally is planned this week for people who want to speak out against Florida's decision to reject an AP African American studies course. Monday, Gov. Ron DeSantis gave examples of the lessons that didn't meet state standards.

DeSantis said his administration rejected the College Board's Advanced Placement African American Studies course because "we want education, not indoctrination." It was revealed last week that the Florida Department of Education recently told the College Board it would bar the course unless changes are made.

The state then issued a chart late Friday that says the course promotes the idea that modern American society oppresses Black people, other minorities and women, includes a chapter on "Black Queer Studies" that the administration finds inappropriate, and uses articles by critics of capitalism.

The governor said the course violates legislation dubbed the Stop WOKE Act he signed last year. It bars instruction that defines people as necessarily oppressed or privileged based on their race. At least some writers the course cites believe modern U.S. society endorses white supremacy while oppressing racial minorities, gays and women.

"This course on Black history, what's one of the lessons about? Queer theory. Now, who would say that an important part of Black history is queer theory? That is somebody pushing an agenda," said DeSantis, a possible Republican presidential candidate in 2024.

Florida House Democratic Leader Fentrice Driskell called the administration’s rejection of the course "cowardly" and said it "sends a clear message that Black Americans’ history does not count in Florida."

"Imagine how boring and closed-minded we’d all be if we only met ideas that we agreed with," she said Monday. 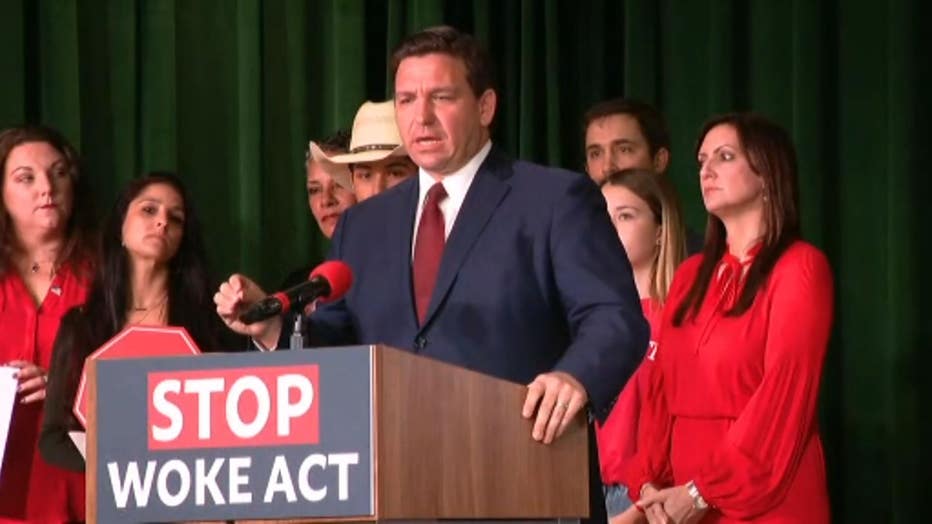 Florida Gov. Ron DeSantis speaks in Wildwood, Florida in April 2022 about the "Stop Wrongs To Our Kids and Employees Act," or Stop WOKE Act.

The College Board, after a decade of development, is testing the African American Studies course at 60 high schools nationwide. No school or state would be required to offer it after its scheduled rollout.

The College Board hasn't responded to emails and calls since Friday. It issued a statement last week saying it encourages feedback and will consider changes.

There's going to be a lot more scrutiny on the books in public school libraries and media centers. The State Board of Education approved new guidelines following months of debate about books some felt were inappropriate.

The state, in its Friday chart, criticized five living authors. The Associated Press emailed them and three responded:

The section on "Black Queer Studies" includes readings by Roderick Ferguson, a Yale University professor of women’s, gender and sexuality studies. The state says he "exclaims, ‘We have to encourage and develop practices whereby queerness isn’t a surrender to the status quo of race, class, gender and sexuality.’"

Ferguson said that quote comes from an interview he did about his book, "One-Dimensional Queer." The book, he said, is a discussion of "employment discrimination, laws against LGBTQ+ people, the suppression of progressive movements in the U.S., police violence against minority communities, restrictions on immigration (and) anti-black racism."

"These are real histories. The arguments about them are based on scholarly investigation and research — as are the arguments from the other scholars on this list," Ferguson said. "Unfortunately, we are in a moment in which right-wing forces are mobilizing to suppress the free discussion of those realities. If we need an example of that mobilization, we could probably just turn to the forces that came together to reject this course."

The state calls out the course for including "Black Study, Black Struggle," a 2016 piece by UCLA history professor Robin D.G. Kelley, saying he "argues that activism, rather than the university system, is the catalyst for social transformation." Kelley called that description oversimplified.

His piece challenges student activists to move their efforts beyond campus and decries racism, inequality, capitalism, militarism and police brutality. But he also said activists must love everyone, "even those who may once have been our oppressors," and read and understand Western literature if they are to criticize it.

He said one point is "that we should not pay so much emphasis on trauma and victimization, but instead understand how we have fought for justice not just for Black people but for the whole nation (yes including struggling white people), despite the violence and oppression we have experienced."

The state also points out Kelley wrote the 1990 book "Hammer and Hoe," a history of communism in Alabama during the Great Depression of the 1930s.

"It won several awards and accolades, including from a few conservative anti-Communist historians, because it is based on thorough research — something DeSantis’ people are not familiar with," Kelley said.

The state criticized the inclusion of a section about "Movement for Black Lives," a coalition of more than 50 groups including Black Lives Matter and the National Conference of Black Lawyers. It says the group wants to abolish prisons and that it alleges there is a "war" against gay and transsexual Black people.

The state criticizes the section's inclusion of a reading by Leslie Kay Jones, an assistant sociology professor at Rutgers University. It cites her quote, "Black people produce an unquantifiable amount of content for the same social media corporations that reproduce the white supremacist superstructure that suppresses us."

Jones said she found no indication that the Movement for Black Lives has ever advocated for prison abolition. She is surprised DeSantis' staff attacked her for criticizing social media companies, as he does the same.

She said this is why students should have the ability "to come to their own conclusions through an evaluation of primary and secondary texts."

"Is Ron DeSantis claiming that Florida students are unable to formulate their own opinions?" she said.