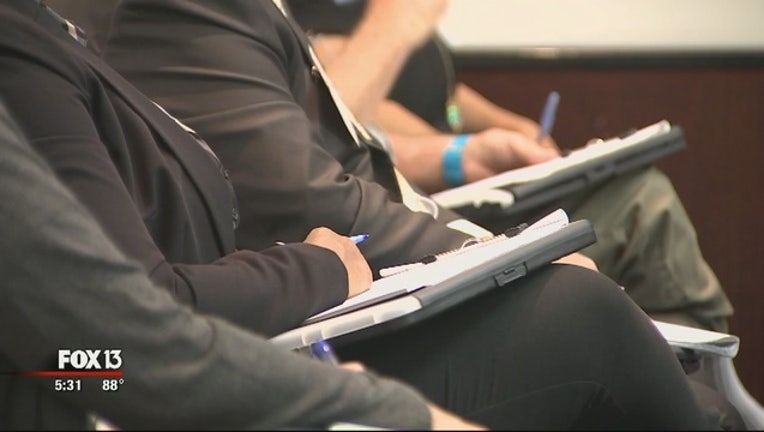 TAMPA (FOX 13) - Eight former jurors gave the public something very rare: Insight into the awesome responsibility of being a juror.

The panel participated in 22nd Annual Bench Bar Conference, an educational forum for members of the Hillsborough County Bar Association. The room was packed with attorneys and judges, hanging on their every word.

Former juror, Raymond Quinones talked about pictures of the crime he says still appear fresh in his memory.

"You see those pictures. You don't get bored. You're just seeking the truth," said Quinones.

Former juror, Mitchel Fidel gave the public a peek inside the jury room during deliberations.

"We voted in the first two minutes. We were very much in agreement to convict but we owed it to the defendant, to everyone, to deliberate," explained Fidel.

Kirk Davis and Sandra Krafchak were jurors in the murder trial of defendant Brian Baker, who was accused of killing his neighbor in 2017.

"We did really well. We went around the table where everybody said what they were going to give him and then why, and that’s how we opened up and we were able to talk to each other," said Krafchaf.

Some jurors were from civil trials and others from criminal trials, but all of their stories were fascinating.

He also explained what didn't work when it came to expert witnesses.

"Everybody’s trying to trump each other’s resumes and it took a lot of time. That could have been better utilized," explained Bartos.

Some former jurors, like Laura Hanis, claimed to have caught bad courtroom behavior.

"There was bullying on one side from the defendant. You could tell when he was losing his patience," she added. "He seemed to lose his cool and that just added a new dimension because we had all this time on our hands to watch behavior."

At times, some gave insight that was just plain funny, like when former juror James Casper explained
what he learned in his trial involving a drug case.

His answer interrupted by a chorus of laughter in the room.