Florida Fish and Wildlife Conservation Commission officials are considering some new rules they hope save the lives of seabirds at the Skyway fishing pier. But fishermen aren't amused by the potential changes, calling it an overreach.

FWC held a 2-hour meeting Monday to discuss the issue, with more than 100 in attendance, mostly bird rescuers and fishing captains.

A bird rescue group sprang into action, using a zipline attached to the old Skyway Bridge fishing pier to get to the trapped bird.

RELATED: Rescue group pleads for help as they rescue hundreds of pelicans from Skyway pier

"These pelicans are being severely and fatally injured," Friends of the Pelicans vice president Kim Begay said.

One angler said, "What they're just trying to do is just take everything away from us fishermen." 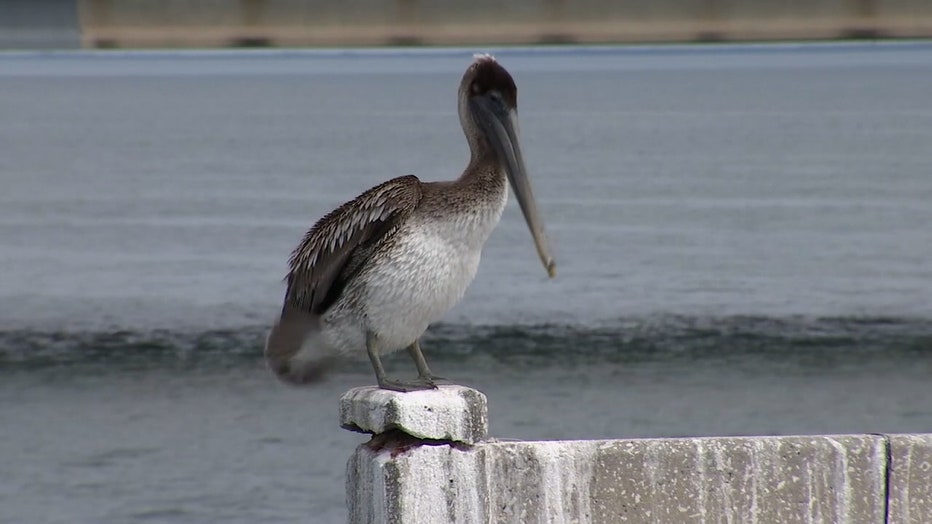 Volunteer bird rescuer Fairl Thomas acknowledged the main problem: anglers and birds are drawn to the area because it's a prime fishing spot.

But if a bird gets tangled and flies off before a rescuer can remove the hook, some say it's a death sentence for the animal.

Hundreds of pelicans are being rescued every week after being entangled in fishing wire near the Sunshine Skyway Bridge. A non-profit hired a full-time rescuer to help with the job.

"We care about the birds of the estuary, very much so," fishing captain Zac Sturm said.

Sturm feels educating anglers is the key. He also questioned if one particular rescue method may contribute to the problem.

The method involves using bait fish to lure injured and entangled pelicans to the pier so rescuers can remove the hook.

"Unfortunately, it's creating an artificial environment for these pelicans to be fed," Sturm said.

How can Florida protect pelicans at the Skyway Fishing Pier?

Changes could be on the way for those who fish off the Skyway Pier, and it's all in an attempt to save pelicans and seabirds from getting hurt from fishing lines and hooks. FWC is holding a virtual workshop to get feedback on the proposed regulations.

Thomas understands the concerns of fishermen, but underscored it's a matter of life or death for the birds.

Another point of contention are the type of hooks being used. Rescuers say treble hooks and Sabiki rigs pose a much greater risk than single hooks.

"You need Sabiki rigs to catch bait. A lot of people that go to the Skyway only go there to catch bait with a Sabiki rigs so a lot of these regulations have long-standing recreational fishing impacts," Hubbard said.

An option both sides seemed to agree on is to make the north end of the pier accessible to rescuers. That's where any entangled birds go. Right now, it's closed so rescuers cannot get to the injured birds.

The main rule change FWC is considering is to only allow single hooks. They'll take the feedback they received and present recommendations to the commission at their February 2023 meeting.