ST. PETERSBURG, Fla. - How far would you go to help an injured bird? When volunteers from Friends of the Pelicans spotted a young pelican entangled in fishing line on a span of the old Skyway Sunshine Bridge, they knew he would die if they didn't do something.

That span was part of the demolition, so there's no way to get there except by boat, which can be dangerous. After a flurry of phone calls and social media posts, Mike Bitler of St. Petersburg came to the rescue.

He says he and his four children often rescue birds around John's Pass, but this would be his first using his skills as a recreational climber and part-time arborist. Bitler geared up and got lucky the first time tossing his weighted-lead bag more than 75 feet across, from the North Skyway Fishing Pier to the old span.

"I took what's called a throw ball and a throwline. It's just a thinner-diameter rope tied to a lead weight, a 14-ounce lead bag. I threw it across and just manipulating it, giving it sharp little tugs. It dropped into the water," Bitler described. 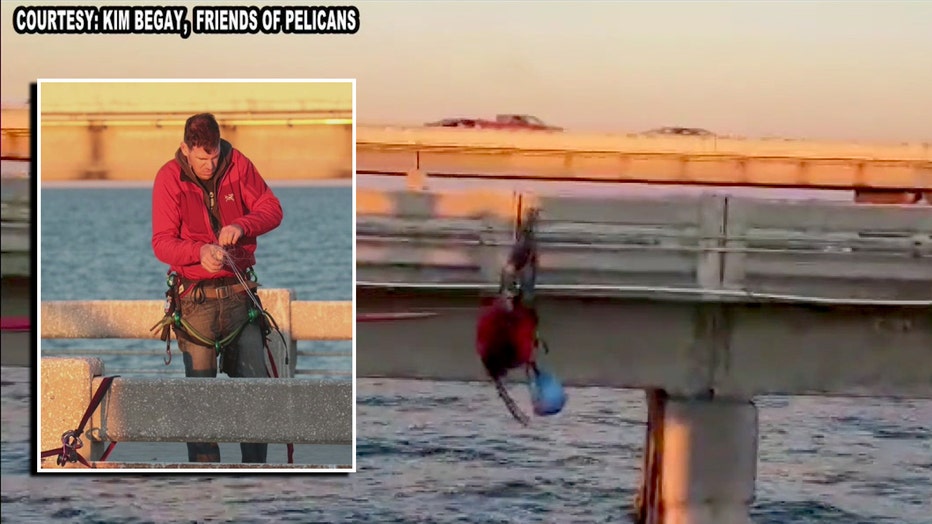 Fisherman Marko Furundzi of Chicago jumped in to help, using his rod to snag the bag and reel it in. From there, Bitler says it's a lot like ziplining, 30 feet above the waters of the gulf.

It could be dangerous, but, "I wouldn't do anything that wouldn't let me come home to my four children at the end of the day," Bitler said.

When he got there, he found the young pelican hopelessly entangled in fishing line, weights, and lures. He says there's no way it could have escaped and would have starved to death.

"It sounds like an exaggeration, but I genuinely think with the amount of weights, it was about 10 pounds of sinkers attached to various lines that were out there," Bitler described.

After securing the bird in a shopping bag, it was time for the 75-foot journey back, which wasn't so easy. 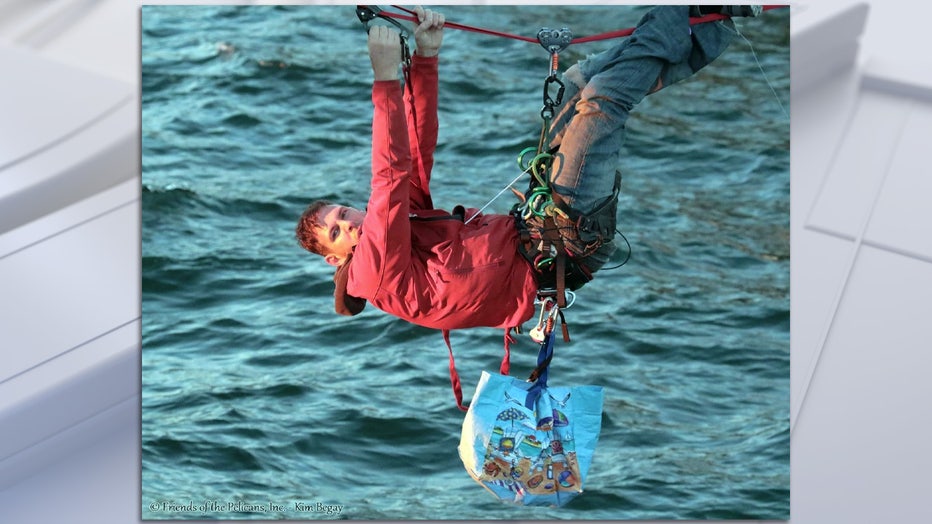 Says Bitler, "In hindsight, I should have made the line a lot tighter. It would have made for a lot easier on the way back. I needed a little help at the end there."

That help was a rope from Furundzi, the same fisherman who helped him set the line.

Eagerly awaiting were Kim Sauls Begay and Jeanette Edwards of Friends of the Pelicans, who couldn't believe how feisty the little guy was after having gone without food for at least two days. 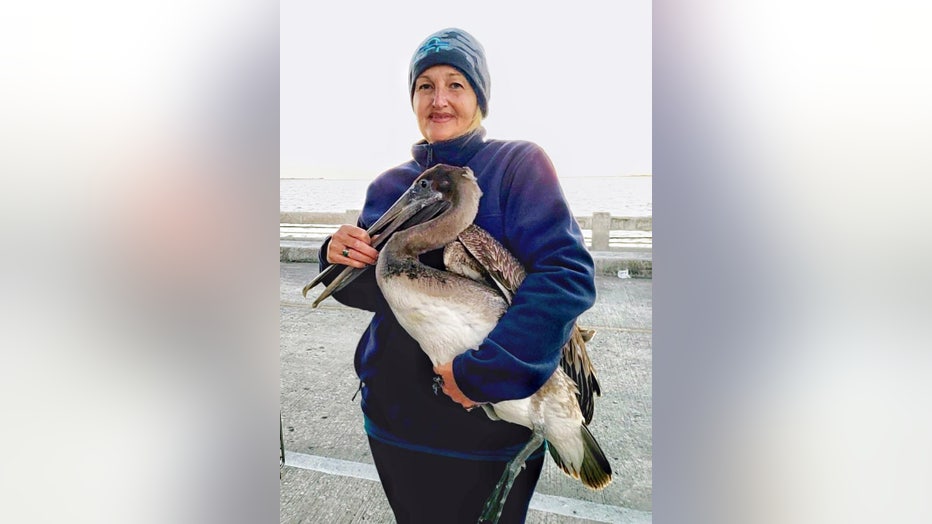 They're grateful to Mike Bitner, who stayed humble about what he did.

"Doing the right thing, that's all it was," he said.

The pelican is being cared for at Save Our Seabirds in Sarasota and has a good prognosis. Rescues like this don't happy every day, but pelicans getting entangled and dying does.

Begay and Edwards are urging the people of Tampa Bay to learn more about what's happening to pelicans and what you can do to help by visiting https://www.facebook.com/friendsofthepelicans.