ST. PETE BEACH, Fla. - An investigation is underway after someone set off a firework inside a black skimmer nesting area on St. Pete Beach.

In the last week, there have been at least two incidents of vandalism reported against the birds inside nesting areas. Tuesday night, someone removed multiple posts that acted as a barrier to the area.

Those who work to protect nesting shorebirds say it's hard to understand why anyone would go to great lengths to harm this innocent wildlife. 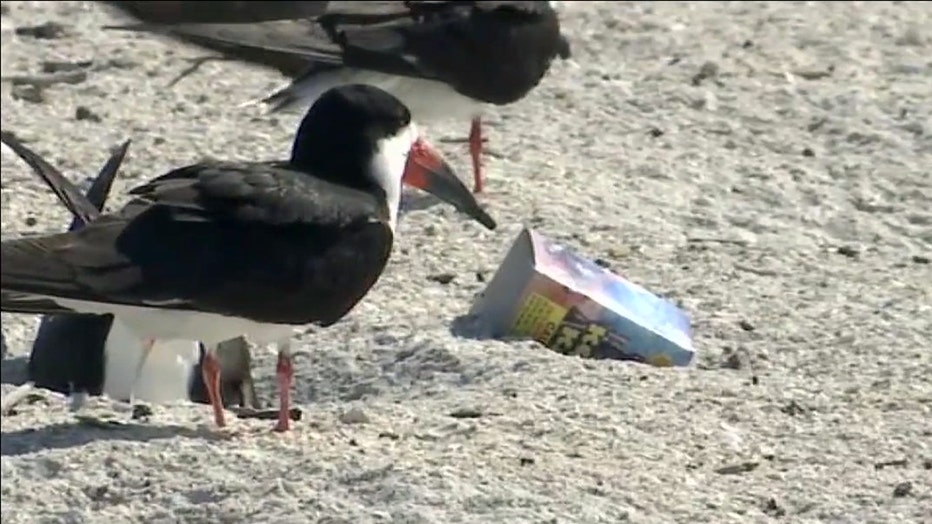 "It really is heartbreaking in my opinion just because these birds have nowhere else to go," said Holley Short with Audubon Florida, a non-profit dedicated to protecting Florida's birds.

The month of May is the mating season for black skimmers. This year, about 400 of them settled on a section of St. Pete Beach to mate and lay eggs, but last Wednesday their nesting area was disturbed.

PREVIOUS: Wildlife experts remind beachgoers to give animals space as they head back to the shore

Many of you will head out to the beach this holiday weekend. But before you pack up, remember there are others that call the beach home, and they need some space too.

"Disturbances like those fireworks can cause the skimmers to abandon their eggs and leave them vulnerable and exposed," Short said.

Black skimmers have set up their nests on Lido Beach and there's something beachgoers need to know.

Short said because of last week's incident, crows were able to eat the eggs. That means the mating process has to restart for a group of birds already considered a protected species.

"These eggs are so important to get to that hatching stage. It takes months for these eggs to hatch and then another month for these chicks to be able to fly," Short said.

It's why Audubon Florida goes to great measures to protect them, roping off the area with clear signage informing beachgoers not to disturb the nesting area.

So far, FWC is still working to track down the vandals. Short hopes the people or person behind it will have a little more compassion and think twice the next time they encounter an already vulnerable species.

Some rare beach birds are making a comeback, but it's still a fight to survive. Dozens of black skimmers turned up dead on St. Pete Beach last September. Now, skimmer nests have turned up at Fort Desoto.

"It's important to protect the wildlife to be able to enjoy it for future generations," Short said.

Anyone with information about what happened is asked to call FWC's Wildlife Alert Hotline at 1-800-404-3922.