The prosecution said it would need about 20 minutes to deliver opening statements. Defense lawyers said they would need no more than an hour in the sex trafficking trial of Ghislaine Maxwell.

NEW YORK - Two years after Jeffrey Epstein's suicide behind bars, a jury was selected Monday in Lower Manhattan to determine a central question in the long-running sex trafficking case: Was his longtime companion, Ghislaine Maxwell, Epstein’s puppet or accomplice?

Twelve jurors and six alternates will hear Maxwell’s case, starting with opening statements expected later in the day. They were picked from a pool of 40 to 60 potential jurors who made it through initial questioning.

Maxwell — who once dated the financier — is accused of acting as Epstein's chief enabler, recruiting and grooming young girls for him to abuse. The charges against her stem from the allegations of four women who say she and Epstein victimized them as teens from 1994 to 2004.

Opening statements are expected to begin in lower Manhattan Monday in the sex crimes trial of socialite Ghislaine Maxwell, the longtime confidant of Jeffrey Epstein.

Prosecutors say there’s evidence Maxwell knew that the victims, including a 14-year-old, were below the age of consent and that she arranged travel for some between Epstein’s homes, including his estate in Palm Beach, Florida, his posh Manhattan townhouse and at other residences in Santa Fe, New Mexico, and London.

Epstein killed himself at a Manhattan federal lockup in August 2019, a month after his arrest on sex trafficking charges. Authorities charged Maxwell in July 2020, arresting her after tracking her to a $1 million New Hampshire estate where she had been holed up during the coronavirus pandemic.

Maxwell has pleaded not guilty and vehemently denies wrongdoing. The 59-year-old British socialite, jailed in Brooklyn since her arrest, has called the claims against her "absolute rubbish." Maxwell's lawyers and family say she was Epstein's pawn, now paying "a blood price" to satisfy public desire to see someone held accountable for his crimes.

The wealthy, Oxford-educated Maxwell is the daughter of British newspaper magnate Robert Maxwell, who died in 1991 after falling off his yacht — named the Lady Ghislaine — near the Canary Islands. Robert Maxwell, whose holdings at the time included the New York Daily News, was facing allegations that he had illegally looted his businesses’ pension funds.

One of the most anticipated criminal trials begins Monday when a jury will begin hearing arguments in the case against Ghislaine Maxwell, who is accused of helping Jeffrey Epstein find underage girls to sexually abuse.

Maxwell holds U.S., British and French citizenship and was repeatedly denied bail in the run-up to her trial.

Maxwell grew up in a 51-room English country mansion where high-society parties were punctuated by trumpeters and fireworks. BBC images from the time show Ghislaine as a child with a kid-size plate of food, learning how to be a master networker.

Her father, born Jan Ludvik Hoch, was born to Yiddish-speaking parents in what is now southwestern Ukraine. Escaping the Holocaust, he ultimately joined the British Army and transformed himself into Robert Maxwell.

Ghislaine was Maxwell’s youngest, born on Christmas Day 1961. Her 15-year-old brother Michael was severely brain-damaged in a car accident just days later. Her mother, Elisabeth Maxwell, wrote in her memoir that their baby daughter was overlooked as a result: A the age of 3, Ghislaine declared, "Mummy, I exist!"

"I was devastated,’’ Elisabeth Maxwell wrote. "And from that day on, we all made a great effort with her, fussing over her so much that she became spoiled, the only one of my children I can truly say that about.’’

While at the University of Oxford, Ghislaine Maxwell began building high-profile contacts. After graduating, she worked for her father and, in 1991, became his U.S. emissary after he bought the Daily News amid efforts to compete with fellow media tycoon Rupert Murdoch.

Later that year, Robert Maxwell fell off his yacht — the Lady Ghislaine — and drowned in what some saw as an accident and others a suicide. Investors would discover his wealth was an illusion: He had diverted hundreds of millions of pounds from the pension funds to prop up his empire. 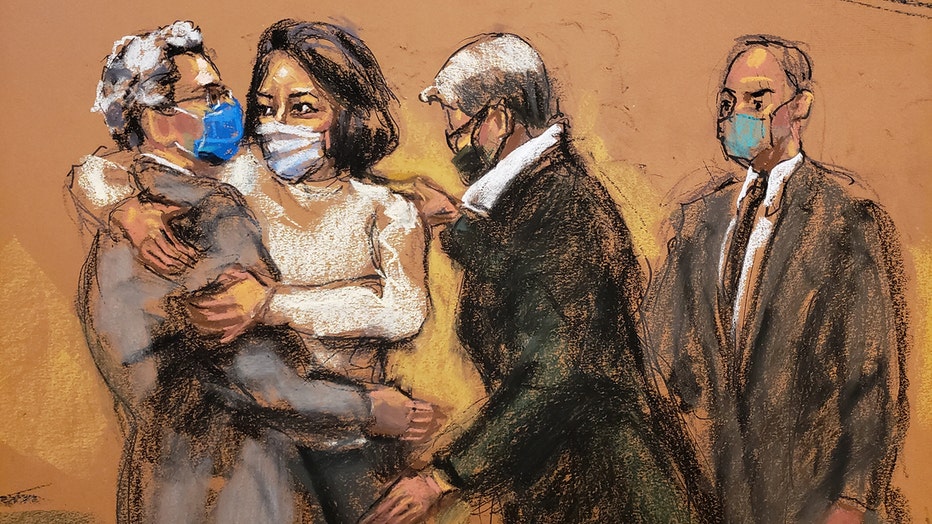 Soon after his death, Ghislaine Maxwell was photographed sitting next to Epstein during a memorial.

Ian Maxwell said her relationship with Epstein developed after the family advised her to remain in the U.S. because the Maxwell name was tainted in the U.K. She had to forge new friendships in New York, he said.

One of those was with Epstein, a onetime teacher who built his fortune on the back of his own powerful contacts.

"My father was a powerful man — you know, an alpha male, really. And when you have that kind of experience, all of us, all of the brothers and sisters have had to somehow deal with that," Ian Maxwell said. "Ghislaine was no exception. But clearly to then say, ‘Well, you know, he dies, then she moves along to the next rich man.’ I just don’t buy that." 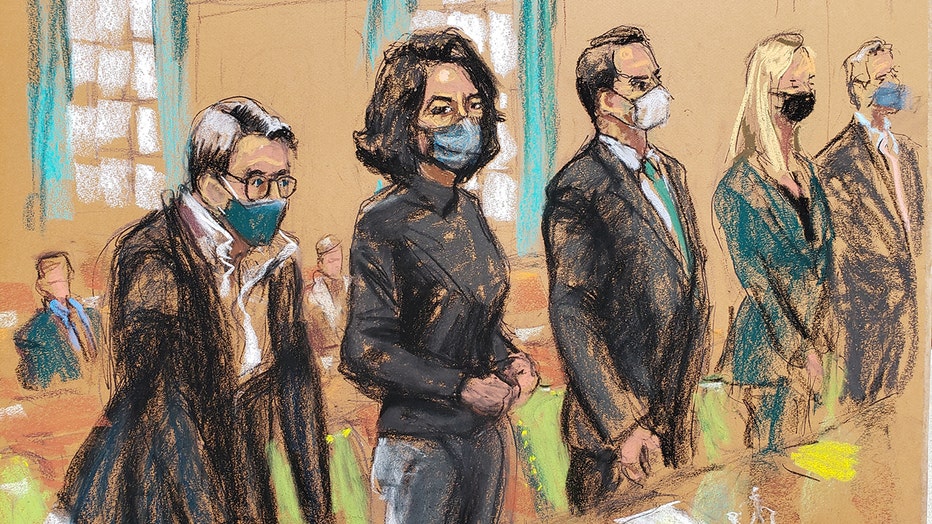 British socialite Ghislaine Maxwell flanked by her attorneys at the start of jury selection in her sex abuse trial. (Sketch by Jane Rosenberg)

In sworn testimony for an earlier civil case, Ghislaine Maxwell acknowledged she dated Epstein but said she later became his employee, tasked with things like hiring staff for his six homes.

But in 2005, Epstein was arrested in Palm Beach, Florida, accused of hiring multiple underage girls to perform sex acts. He pleaded guilty to a charge of procuring a person under 18 for prostitution and served 13 months in jail.

Years of civil litigation followed, in which women accused Epstein and Maxwell of sexual abuse. Prosecutors in New York charged Epstein with sex trafficking in 2019, but he killed himself in jail before trial.

Annie Farmer alleges she was 16 when she was tricked into visiting Epstein’s New Mexico ranch under the guise of attending a bogus event for college-bound students. She said Maxwell tried to groom her by taking her to the movies and shopping, and giving her an unsolicited massage while the teenager was topless.

The AP does not identify people who say they were victims of sexual abuse unless they come forward publicly. Although not identified in court documents, Farmer has described her experiences to ABC and The New York Times. When Maxwell sought bail, Farmer asked the judge to deny it, calling her a "psychopath."

Prosecutors say Maxwell had gone into hiding after Epstein’s suicide, moving into a gated New Hampshire home — with a husband her lawyers have declined to publicly identify — and wrapping her cellphone in foil to ward off hacking.

Maxwell has remained mostly silent about the Epstein allegations, but in a 2016 deposition, she said she learned about the accusations "like everybody else, like the rest of the world, when it was announced in the papers.’’

She said she never saw Epstein getting massages from anyone under 18 and that no one ever complained to her that Epstein demanded sex.

With Epstein gone and no apparent recordings of alleged incidents, a jury will soon decide who it believes.