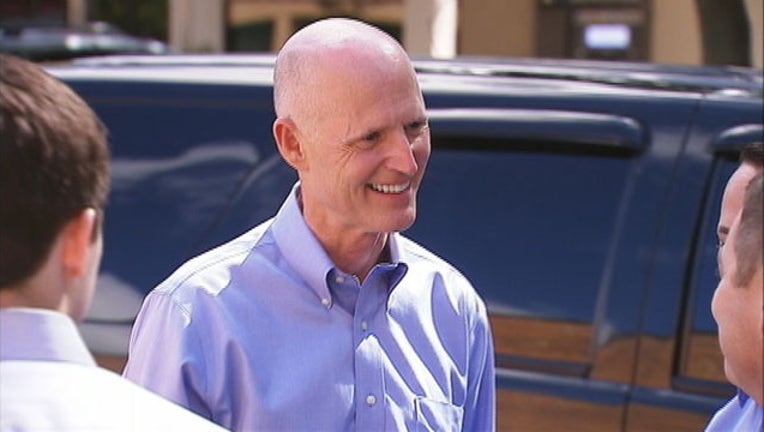 Florida Gov. Rick Scott on Tuesday denied allegations from a report that made national headlines this week with claims that his administration banned use of the terms "climate change" and "global warming" in official documents and speeches.

Scott -- an open skeptic of climate change -- made the denials in response to the Florida Center for Investigative Reporting's report, which quoted former employees and contractors who said they were told not to use the terms.

"Well, first off, that's not true," Scott told reporters in Tallahassee on Tuesday when asked whether government scientists were being told not to talk about climate change. "At our Department of Environmental Protection, there's lots of conversation about this issue. From my standpoint, like every issue, my goal is: Instead of talking about it, let's do something about it."

Chris Byrd, a former Florida Department of Environmental Protection attorney who said he was forced out of the agency in 2013, told The Associated Press that he was told by superiors at a staff meeting not to use those terms.

While there was no written policy banning the terms, Byrd said supervisors made it clear verbally. Byrd, who worked on the state's coral conservation program, said he went along with the request over fear of losing his job.

"We decided it was important for us to maintain jobs and continue projects and just keep our head down and stay out of the attention of the governor's office," Byrd said. "We didn't want to do anything to create waves; we had a fear that our entire program would be shut down."

Evidence suggests there hasn't been a total blackout of the terms in state literature, but they can be hard to find.

For example, the DEP's website for the coral program still includes information about man-made climate change.

"Both natural and anthropogenic (man-made) processes contribute to changes in global weather patterns such as temperature, rainfall, snowfall and wind," the website reads.

"These changes have been observed throughout earth's history, but with the onset of the industrial revolution and the human population explosion, increases in the intensity of climate changes associated with human activities have been reported with growing frequency."

That website was updated after Scott took office in November 2011.

In response to questions about a supposed ban on speech about climate change, Lauren Engel, a spokeswoman for DEP, said "It's not true." She did not elaborate.

Jim Harper, a former DEP contractor who says a report he worked on had a reference to climate change expunged, is now the president of the South Florida chapter of the climate advocacy organization 350.org.

Harper said there was no hard ban at DEP, but workplace culture discouraged using terms that didn't fall in line with the administration's biases.

"There's a culture of silence. When people have lost their jobs, you learn to play by the rules," Harper said.

Jerry Phillips, a former DEP lawyer who now works for the Florida Public Employees for Environmental Responsibility, says reports of unofficial bans on language jibed with the agency's culture even before Scott took office.

Still, Phillips said, it is getting worse for employees, and he worries that DEP scientists are under pressure to release inaccurate information.

"As a public employee you have an obligation to put the truth in documents," he said. "If you're falsifying what's in a document, you've got some problems on your hands."