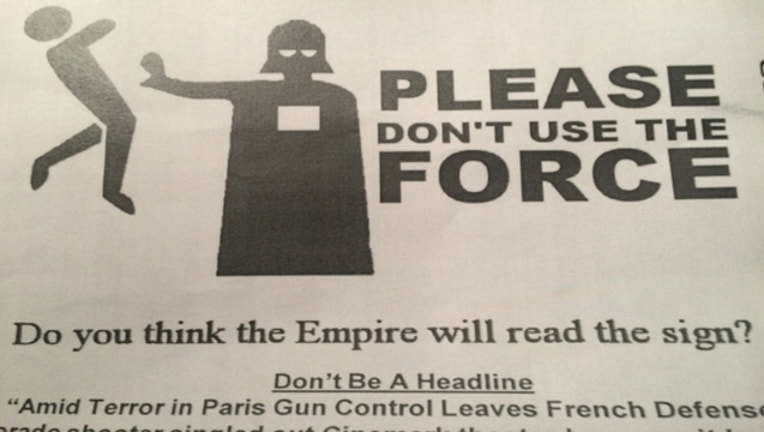 ORLANDO, Fla. (WOFL FOX 35) - Gun rights advocates plan to pass out flyers at an Orlando movie theater that will be showing the new Star Wars: The Force Awakens this weekend.  They are using Darth Vader to make their point that bad guys don't believe in gun-free zones, and the gun rights advocates believe people should arm themselves.

Organizers call their effort a "gun-free zone education campaign." They believe places where no one is allowed to take a gun leaves all the people there vulnerable if a criminal shows up with a gun.

The flyer reads, "Please Don't Use The Force" and asks, "Do you think the Empire will read the sign?"

Peter Lee is director of Orlando's East Side Tea Party.  He has formed a new group to talk about what he calls the dangers of gun free zones.  He says, "Those dangers are, you are depriving people of their right to self-defense."

Lee's new group is called Connected Communities of Central Florida.  He's tying his campaign to the Star Wars premiere this weekend.  Many theater companies are making it clear that security will be a high priority for the huge crowds.

Lee asks, "Would Darth Vader actually pay attention to a no gun-free zone sign? I don't think he would. Evil does what evil does."

Lee's group wants to talk to Star Wars movie goers at the Regal Cinemas in Waterford Lakes.  He understands some movie goers might not want a dose of gun politics with their weekend entertainment plans.  Lee adds, "Well sure, but if you choose not to defend yourself, then you are forcing somebody else to do that for you."

We have not heard back as of Tuesday night from Regal Cinemas or W.P. Glimcher, the company that owns the plaza where that theater is located.