KATHLEEN, Fla. - For many in Kathleen, a warm meal and a friendly smile was all that was needed to make one of their hardest days just a little better.

The powerful EF-2 tornado packed 120-mph winds and wreaked havoc on the small town, but the community is now coming together in big ways.

"They're working so hard just trying to clean up and be able to even go back to work tomorrow, so we knew that today was the day," said Ed Kirkland, the owner of Harvest Meat Market in Kathleen.

Harvest Meat Market spent the day making warm meals and handing them out to those along some of the hardest hit streets in Kathleen.

"These people are without electricity and don't know how long they won't have any, and some of them don't even have any homes to go back to," said Diane White with Harvest Meat Market.

It's a small gesture that means so much to Kathleen residents. 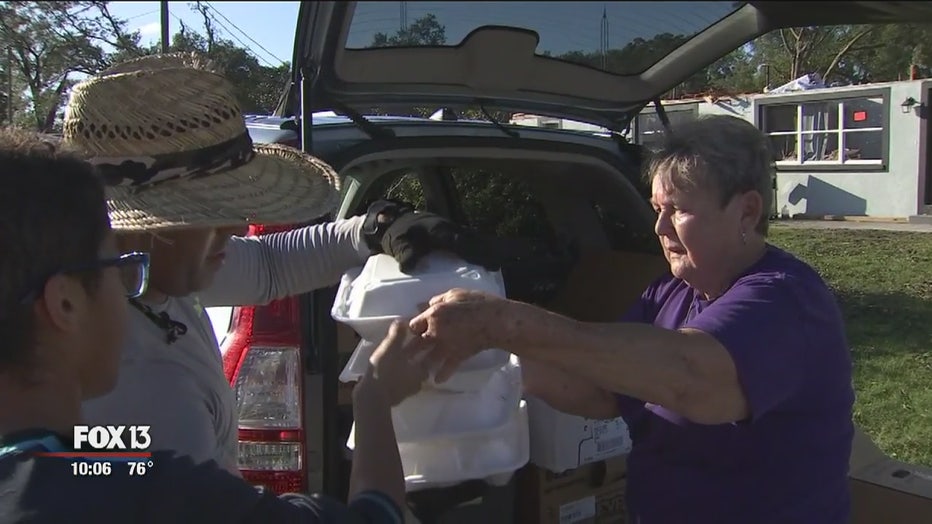 Many residents are still without power and running water.

Bill Wright is one of those hardest hit in the town. All that's left of his home is mere walls.

"Tomorrow the walls are coming down, we're going to clear off the whole thing and just start over," Wright said.

However, starting over is no small task, and for those who spent all day trying to put the pieces back together, a warm meal was a welcome distraction.

"It was awesome," said Wright. "This is about the second or third time they've been through here, so yeah, it was awesome."

While there is a long road ahead, the community remains positive.

"There's a lot of people who is just as bad as me almost," said Wright. "But it will all come together."

Over 500 meals were handed out during the day on Sunday. However, Kirkland said they will continue to hand out meals as long as they are needed.