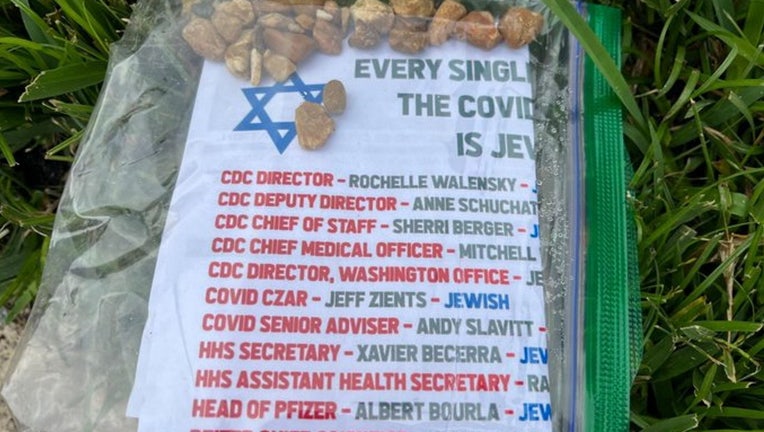 In a photo Gelber posted, half of the flyer is legible. It lists off some of the health officials in Washington leading the response to COVID-19 and says they are Jewish.

One resident, who asked not to be identified, described the flyer to the news outlet: "The front is labeled, ‘Every single aspect of the COVID agenda is Jewish,' and then goes through the CDC director, deputy, medical officer, all the different people that are involved with COVID, and puts the word ‘Jewish’ next to them."

But neighbors said what was written on the back was even worse.

"One of the things they say is to ‘sacrifice people, including Jews, sometimes when necessary,'" a resident told WSVN. "I mean, that is, to me, that’s hate speech."

Home security camera footage showed a car driving through a neighborhood, tossing the flyer in a plastic bag with pebbles inside onto a driveway.

As a precaution, Gelber and Surfside officials said patrols were being stepped up in neighborhoods and at religious institutions. Local and federal law enforcement agencies were investigating the flyers' origins, officials said.

"There is no place for this in our community & we will do all we can to make that point clear," Gelber tweeted.