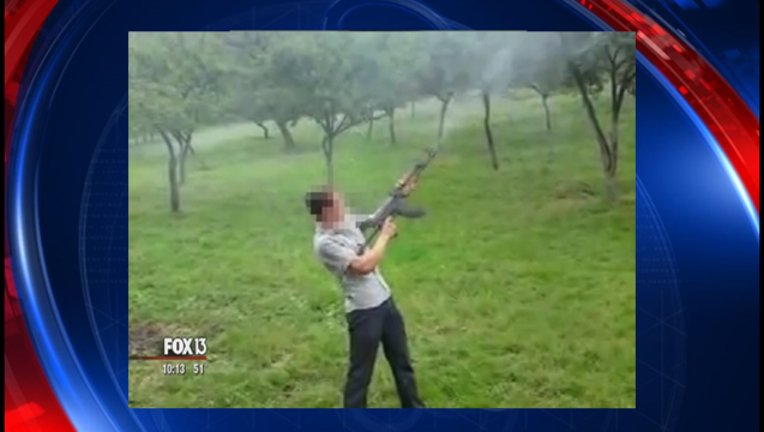 HILLSBOROUGH (FOX 13) - Despite deputy warnings before the holiday about the dangers of celebratory gunfire and a strong message of intolerance, Hillsborough County deputies say they responded to two such cases  this New Year's Eve.

According to deputies, celebratory gunfire has been a reoccurring problem across the area and that New Year’s Eve is one of the common days to find people randomly firing their guns into the air. In fact HCSO had reported 39 gunshot incidents at the start of 2016. And gun experts say falling bullets can hit buildings, vehicles and even people.

"When a bullet leaves a firearm, it can travel two to five miles," said Bruce Kitzis, the general manger at Shooter's World, "and that bullet is coming back down. That's what people need to understand. When it comes down, it comes with a terminal velocity." Kitzis said a bullet can fall 900 feet per second.

Ruskin teenager Diego Duran was hit in the head by a falling bullet on January 1, 2012. He survived to tell his story through the organization "Bullet Free Sky." It has become the focus of a PSA the Sheriff's Office said it is showing students in Hillsborough County Schools, both in English and in Spanish.

Now, just before the start of 2017, HCSO deputies say they responded to the first victim, 55-year-old Terry Wayne Snyder at approximately 9:10 p.m., Saturday night. Deputies say Snyder was riding a bicycle on Deerfield Street when he felt a sharp pain in his leg at the same time he heard fireworks in the area. Snyder was taken to Tampa General Hospital where he was treated for a gunshot wound and later was released.

Officials say the second victim was 22-year-old Jesus Daniel Garcia Renteria who was standing in the front yard of a home on 1st Street in Wimauma. Deputies say Renteria was watching fireworks when a bullet struck him in the arm.  Witnesses at the home had no idea where the shot came from and nobody saw any weapons. The victim was transported to Tampa General Hospital where he was treated and released for a gunshot wound.

HCSO deputies have not made any arrests in either of these two incidents but they continue to investigate. Crime Stoppers of Tampa bay is also offering a reward of up to 3,000 for information that leads to the identification and arrest of the unknown suspect involved in these two cases. Anyone with information is asked to call Crime Stoppers at 1-800-873-TIPS (8477), report anonymously online at http://www.crimestopperstb.com or send a mobile tip using the P3 Tips Mobile application.