Beacon in the Galaxy: Scientists create message to beam into outer space

An international team of scientists has gotten together to create a message to potentially beam out into the cosmos with hopes it'll reach extraterrestrial life forms.

Astronomers at the Massachusetts Institute of Technology (MIT), along with several other institutions, have detected a strange but most notably persistent radio signal in a galaxy billions of light-years away from Earth.

The signal was classified as a fast radio burst (FRB), which is basically a strong burst of radio signals originating from an unknown source somewhere in the universe, according to an MIT news release.

The bursts last only milliseconds but this most recently discovered FRB persists up to three seconds, which is about 1,000 times longer than a typical FRB.

"Within this window, the team detected bursts of radio waves that repeat every 0.2 seconds in a clear periodic pattern, similar to a beating heart," according to MIT.

The new "heartbeat" radio signal has been dubbed FRB 20191221A and it is currently the longest-lasting FRB with the clearest pattern to date.

Astronomers at MIT speculate the source of the FRB is from either a radio pulsar or a magnetar. Both radio pulsars and magnetars are types of neutron stars.

Neutron stars are massive stars that undergo supernova explosions or more simply put, they collapse on themselves due to their sheer size.

"There are not many things in the universe that emit strictly periodic signals," said Daniele Michilli, a postdoc in MIT’s Kavli Institute for Astrophysics and Space Research. "Examples that we know of in our own galaxy are radio pulsars and magnetars, which rotate and produce a beamed emission similar to a lighthouse. And we think this new signal could be a magnetar or pulsar on steroids."

Since the first recorded FRB in 2007, astronomers have been able to identify two types: ones that repeat and ones that don’t.

There have been hundreds of FRBs detected across the universe and the majority of them are one-offs, according to MIT.

In 2020, astronomers detected the first consistently recurring FRB emanating from an unknown source nearly 500 million light-years away from Earth. 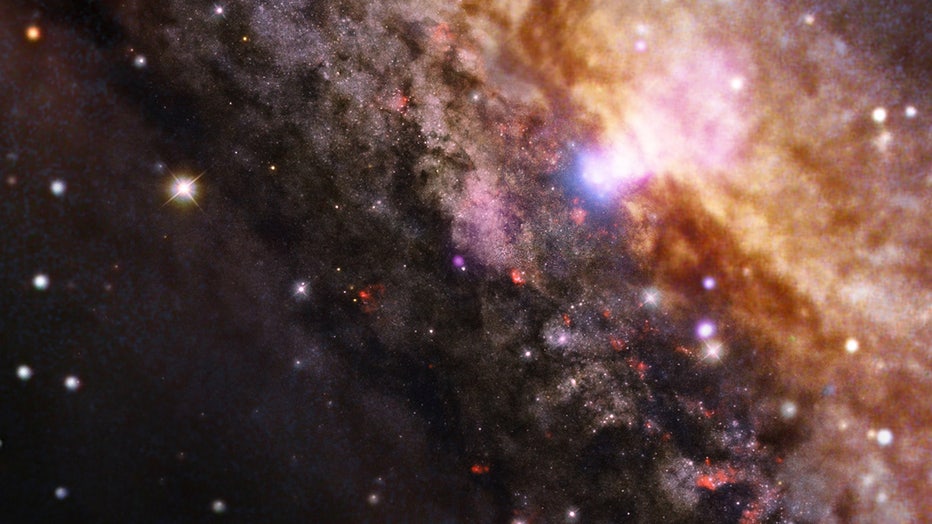 FILE - This galaxy, known as NGC 4945, is only about 13 million light years from Earth and is seen edge-on. X-rays from Chandra (blue), which have been overlaid on an optical image from the European Space Observatory, reveal the presence of the super (NASA/CXC/Univ degli Studi Roma Tre/A.Marinucci et al, Optical: ESO/VLT & NASA/STScI)

This FRB occurred during a four-day window and then repeated every 16 days, MIT said.

The Canadian Hydrogen Intensity Mapping Experiment, or CHIME, detected the 2020 FRB and ever since its debut in 2018, CHIME has detected hundreds of FRBs emanating from different parts of the sky.

"CHIME has now detected many FRBs with different properties," Michilli said. "We’ve seen some that live inside clouds that are very turbulent, while others look like they’re in clean environments. From the properties of this new signal, we can say that around this source, there’s a cloud of plasma that must be extremely turbulent."

Now that astronomers have detected this most recent FRB, they hope to continue to monitor its signals and hope to better understand and possibly nail down a solid explanation for the source.

"This detection raises the question of what could cause this extreme signal that we’ve never seen before, and how can we use this signal to study the universe," Michilli said. "Future telescopes promise to discover thousands of FRBs a month, and at that point we may find many more of these periodic signals."