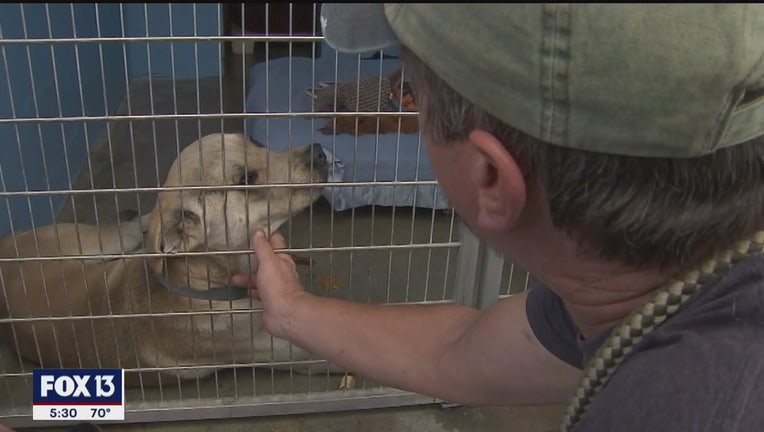 BROOKSVILLE, Fla. - George Treanor says his dog, Toby is dangerous. He says Toby has growled and threatened to bite in the past. Fearing Toby could do more, Treanor took Toby to Hernando County Animal Services to surrender Toby, but they said the dog does not meet the criteria for owner surrender.

Treanor then tried to have Toby put down, but the veterinarian said Toby does not meet the criteria for that, either.

But Treanor was angered when Hernando County Animal Services wouldn't take an owner-surrendered dog unless the dog had bitten someone, and also because the shelter is over its capacity.

So he went to the county commission to ask what he should do.

"Nobody wants my dog," he told the commission, adding that the vet will not euthanize an otherwise healthy dog.

At first, Commissioner Steve Champion suggested this: "It is legal to shoot your dog in a humane way if it is causing harm or damage to property."

Man turns over dog he says is dangerous

George Treanor says Toby the dog has growled at his wife and tried to bite his son, but Hernando County Animal Services refused to take Toby and a vet refused to put Toby down.

The commissioner later told FOX 13, "I gave examples of defending human life or property from a dangerous animal. I own animals myself and, of course, I was not advocating to just harm or kill animals."

State statute 828.058 specifies euthanasia can only be performed by injection by those trained.

The Hernando County Sheriff's Office says if there's a complaint, euthanasia by gunshot would start an investigation for animal cruelty.

In this case, a private individual stepped up and offered to take Toby to the Humane Society of the Nature Coast, which accepted him on an emergency basis.

"Every dog here has a past," said Susana Arneson.

They will have Toby trained for six weeks to make him adoptable.

"There is hope," she said. "Just spending a couple of hours with Toby, he is a completely different dog."

The county said that they offered the names of a number of rescues that may have been able to help Toby.