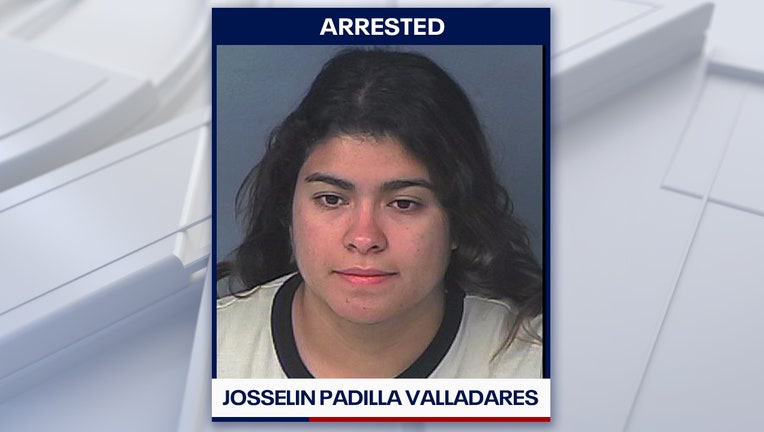 Provided by the Hernando County Jail

BROOKSVILLE, Fla. - A Texas woman was arrested in Hernando County after a Florida trooper noticed the vehicle she was driving had dark-tinted windows that violated state law. It turns out, officials said, the woman was transporting several undocumented men to Tampa.

The traffic stop occurred Monday around 4:20 p.m. in the southbound lanes of Interstate 75 in Brooksville. According to the Florida Highway Patrol, a trooper first spotted the white 2015 Chevrolet Suburban with a Texas tag.

"All of the side windows in addition to the rear window had extremely dark/non-transparent window tint applied to them making it impossible to see into the vehicle," according to an FHP report. "Additionally, there was tint applied to the windshield which appeared to extend below the AS1 marker."

The trooper initiated the traffic stop, and asked the driver, later identified as 21-year-old Josselin Padilla, to roll down the side windows. FHP said Padilla only rolled down the front passenger window and not the rear windows.

The trooper repeated the request and the driver began to reverse the Chevrolet, officials said, but stopped when the trooper asked her to. Then, Padilla rolled down the rear windows, revealing multiple adult male passengers.

"The vehicle had a lived-in appearance with multiple empty drink containers and excessive air fresheners," according to the trooper's written narrative. "Based on, but not limited to, my training and experience, I became reasonably suspicious that the occupants of the vehicle were the victims of human smuggling."

"I noted that the back seat passengers all appeared to be unusually nervous," the trooper noted.

According to FHP, Padilla said she was driving from Houston to head to Tampa and drop off the passengers. She said they were employees of her uncle.

The number of human smuggling cases are on the rise in the Bay Area. Since October, Florida Highway Patrol reports they've investigated at least two dozen human smuggling operations across seven counties.

Additional troopers were requested, and initially, they said there were a total of six passengers, but "located a seventh individual hiding in the rear cargo area. All of the passengers were found to be of Mexican or Honduran nationality."

U.S. Border Patrol was contacted and confirmed to troopers the passengers were in the U.S. illegally. Officials also checked Padilla's criminal history and found she was arrested in 2017 for illegal entry into the country. During an interview, troopers said Padilla stated she is from Honduras.

Troopers said she told them she was paid $900 to bring the passengers to Tampa after picking them up from two separate homes in Houston.

"When I asked her where the passengers were from she responded that they were not from here (the US)," according to troopers. "I asked her to be more specific, and she told me that they were from Mexico and Honduras. However, the front seat passenger was later determined to be Mrs. Padilla's cousin who happened to be traveling with her."

FROM 2021: Human smuggling suspects arrested in 2 different I-75 traffic stops

As the Chevrolet was being towed, troopers said they found notes and ledgers with lists of individuals and the cities they were to be delivered to. One list was connected to the group of passengers in the Chevrolet.

A box of sandwiches and other snacks were located in the vehicle, FHP says.