250K without power in Sarasota County

Crews say it will be a while before it's safe enough to get out and repair downed lines. They ask customers to be patient as they wait out the storm.

TAMPA, Fla. - Hurricane Ian left a path of destruction in southwest Florida, trapping people in flooded homes and knocking out power to over 2.5 million people across the state.

One of the strongest hurricanes to ever hit the United States barreled across the Florida peninsula overnight Wednesday, threatening catastrophic flooding inland, the National Hurricane Center warned.

According to PowerOutage.us, 2,538,000 Florida homes and businesses were left without electricity as of 6:30 a.m. Thursday. Nearly every home and business in three counties are without power.

Devastating flooding in Fort Myers due to Hurricane Ian

Hurricane Ian made landfall Wednesday afternoon near Fort Myers as a major hurricane just shy of a Category 5. The area was somewhat caught off-guard after the storm's projected path began to shift south a day before. Residents had little time to evacuate their homes before feet of water rushed in due to storm surge.

Brittany Hailer, a journalist in Pittsburgh, contacted rescuers about her mother in North Fort Myers, whose home was swamped by 5 feet of water.

"We don’t know when the water’s going to go down. We don’t know how they’re going to leave, their cars are totaled," Hailer said. "Her only way out is on a boat."

Hurricane Ian turned streets into rivers and blew down trees as it slammed into southwest Florida on Wednesday with 150-mph winds, pushing a wall of storm surge. Ian’s strength at landfall was Category 4 and tied it for the fifth-strongest hurricane, when measured by wind speed, to ever strike the U.S.

Ian dropped to a tropical storm early Thursday over land, but was expected to intensify again once its center moves over the Atlantic Ocean and menace the South Carolina coast Friday at near-hurricane strength. Storm surges as high as 6 feet were expected on both sides of the peninsula.

At 5 a.m. Thursday, the storm was about 40 miles southeast of Orlando and 35 miles southwest of Cape Canaveral, carrying maximum sustained winds of 65 mph and moving toward the cape at 8 mph, the hurricane center said. 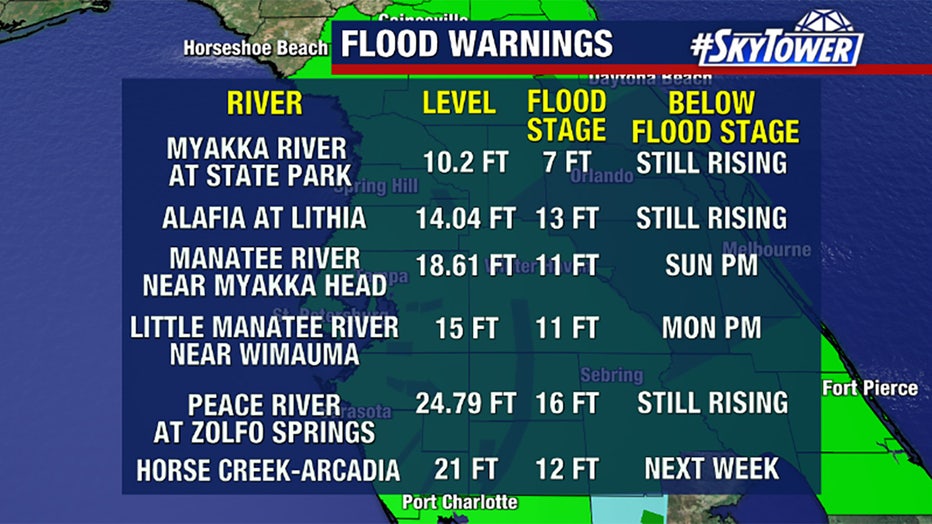 Tropical-storm-force winds extended outward up to 415 miles from the center, and nearly the entire state was getting drenched, with up to a foot of rain forecast for parts of Northeast Florida, coastal Georgia and the Lowcountry of South Carolina. As much as 6 inches could fall in southern Virginia as the storm moves inland over the Carolinas, the center said.

No deaths were reported in the United States from Ian by late Wednesday. But a boat carrying Cuban migrants sank Wednesday in stormy weather east of Key West.

The storm previously tore into Cuba, killing two people and bringing down the country’s electrical grid.

The hurricane’s eye made landfall near Cayo Costa, a barrier island just west of heavily populated Fort Myers. As it approached, water drained from Tampa Bay.

Along Bayshore Boulevard, Hurricane Ian's winds drained the water out of Hillsborough Bay. An eerie sight which also occurred back in 2017 during Hurricane Irma. Video shows a timelapse from a weather camera and ground video from FOX 13 crews.

Life-threatening storm surges and hurricane conditions were possible on Thursday and Friday along the coasts of northeast Florida, Georgia, and South Carolina, where Ian was expected to move inland, dumping more rain well in from the coast, the hurricane center said.

The governors of South Carolina, North Carolina, Georgia and Virginia all preemptively declared states of emergency.

In Lee County, officials enacted an evening curfew and already had some reports of looting.

"There's going to be a zero-tolerance policy for looting and violence in this town," said county manager Roger Desjarlais.

"This is going to be a very difficult, trying time for the next several months," Desjarlais continued. "This response and recovery effort is going to be complex. It's going to be costly. And it's going to be, require very concentrated efforts on the parts of the federal, state and local government agencies and the private sector as well."

Over 2.5 million power outages have been reported in Florida. You can monitor outages on each power company's website: