Charges were expected to be filed Monday in the shooting death of a young Indiana officer.

INDIANA - Madison County Prosecutor Rodney Cummings announced that his office is seeking the death penalty for a suspect accused of shooting and killing a 24-year-old police officer during a traffic stop last month.

Carl Roy Webb Boards II, 42, is facing charges of murder, resisting law enforcement and possession of a firearm by a violent felon in the shooting death of Elwood Police Officer Noah Shahnavaz.

Shahnavaz, who had been with the department for 11 months after serving five years in the U.S. Army, attempted to pull Boards over around 2 a.m. on July 31.

Boards allegedly got out of his vehicle and fired dozens of rounds from a rifle after pulling over, striking Shahnavaz once in the head through his cruiser's windshield.

Deputies from the Hamilton County Sheriff's Office then pursued Boards and took him into custody after performing two PIT maneuvers on his vehicle.

"This is my 24th year in law as a prosecutor. My career has been in law enforcement. I’ve never seen a police shooting like this, never heard of one anywhere in the country. Part of the issue is, is it among the worst of the worst? Absolutely it is," the prosecutor, Cummings, said at a press conference on Wednesday.

The Elwood Police Department set a cruiser up outside of their headquarters to pay tribute to the slain officer. 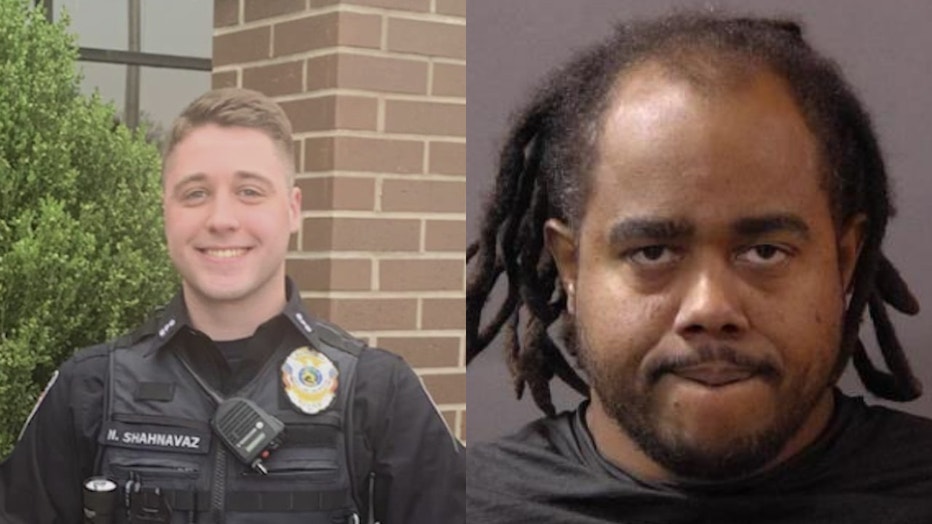 "My family misses Noah more than words can express. We want everyone to remember Noah," he said.
Reporters questioned Cummings on Wednesday about why he is seeking the death penalty when the case is almost guaranteed to get tied up for years in appeals courts, noting that no one has been executed by the state since 2009.

"The death sentence is the law in the state of Indiana. If it’s going to be pursued, this is the kind of case where it needs to be pursued," Cummings said, noting that he can only do his job.

Boards has an extensive criminal history dating back to 1999 that includes convictions for gun crimes and drugs.

A man who lived above a barbershop owned by Boards told police that the suspect recorded a "song making statements that if he was ever caught by police that he would kill them," according to a court filing.

Boards' attorney did not immediately respond to a request for comment on Wednesday.

For more, go to FOX News