ST. PETERSBURG, Fla. - It might just be the epidemic within the pandemic.  So many people have flocked outdoors to have fun safely, it's having an impact on our wildlife. In the Bay Area, that appears to be the case with sea birds that congregate around fishing piers, especially pelicans.

The Seaside Seabird Sanctuary in Indian Shores recently took in a pair of laughing gulls that were entangled in fishing line.

Avian hospital director Melissa Edwards and her assistant manager, Justin Perelli, carefully cut the hook from the bird's neck and unwrapped the line. Unfortunately, all the struggling likely caused the gull to fracture its wing, which Perelli carefully taped to make sure it doesn't get worse.

The gulls were just the latest in a never-ending stream of injured birds made worse by the pandemic.  The sanctuary has a jar of hooks and lines they removed from birds in 2020. It's twice the amount of 2018 and 2019 combined, and most of the incoming birds are from the South Skyway Fishing Pier. 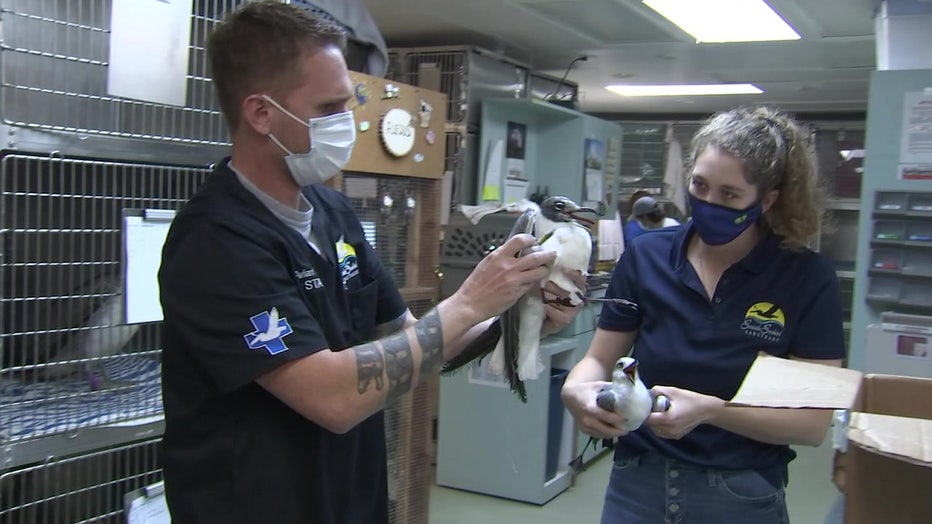 In 2019, Seaside Seabird Sanctuary admitted 64 birds from the Skyway pier. That number more than doubled to 138 birds in 2020, and barely six weeks into the new year, 94 birds have come in from the Skyway pier, most of them young pelicans. Edwards thinks lack of experience is at least partly to blame.

Fisherman Mike Gaby agrees.  He spends a lot of time on the pier and says he tries to help when he can.

Gaby's Facebook fishing group, the ‘Skyway Misfits,’ is hoping to educate people by holding classes. They had one recently and are planning more, including one focused on kids. 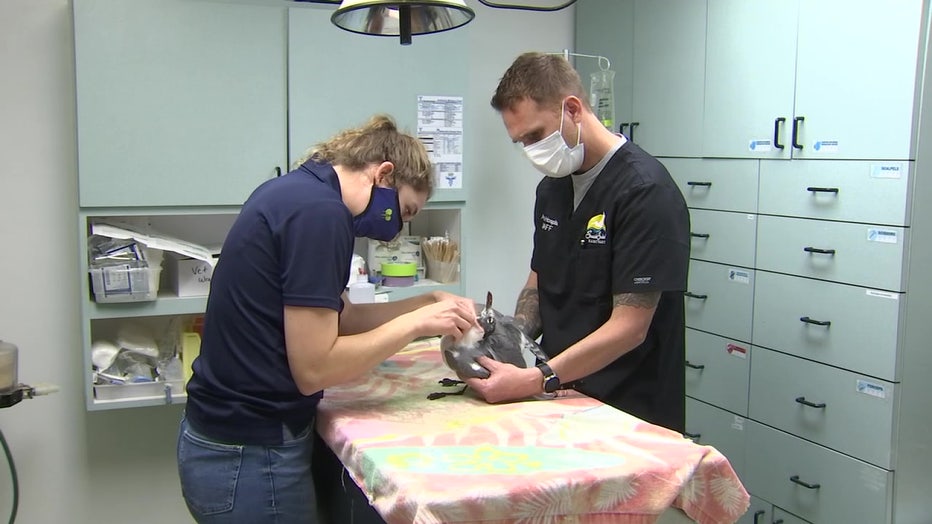 Cullars fishes the South Skyway pier every week. He says he caught a couple of pelicans and a seagull and was able to unhook and release them. He says if you fish here, you need to know-how.

"If you come here, you should know how to take a hook out of a bird's mouth when it's caught.  The birds, this is their territory. The least you can do is preserve what's theirs," Cullars said.

It’s the perfect place for catching fish and sightseeing at the same time. Here's a look high above the fishing pier at the historic old Sunshine Skyway Bridge.

READ: Rescue group pleads for help as they rescue hundreds of pelicans from Skyway pier

A spokeswoman for the Florida Department of Environmental Protection says they're working with Florida Fish and Wildlife and others to try to reduce the number of birds that go to rehab. She says they're in the process of adding signs and hiring a full-time rescuer to supplement the volunteers.

LINKS: Click here for more information about Seaside Seabird Sanctuary, which operates entirely on donations, or visit them on Facebook here.