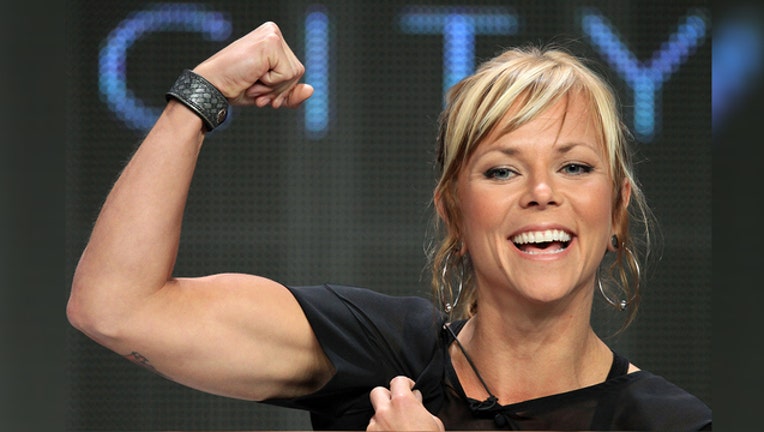 Jessi Combs speaks on a discussion panel for one of the shows she hosted, 'Overhaulin.' The automotive and racing legend died in a car accident Tuesday. (Photo by Frederick M. Brown/Getty Images)

FIELDS, Ore. - Jessi Combs — racer, automotive legend and beloved TV personality who carved out a space for women in the automotive world — died in a driving accident Tuesday afternoon on the Alvord desert in southeast Oregon, her teammate Terry Madden confirmed in an Instagram post Wednesday morning. Combs, 36, was attempting to break the women’s land speed record.

“She was the most amazing spirit that I have ever or will ever know,” Madden wrote. “Unfortunately we lost her yesterday in a horrific accident, I was the first one there and trust me we did everything humanly possible to save her!!”

The Harney County Sheriff’s Office received a 911 call around 4 p.m. Tuesday reporting a crash on the dry lake bed of the Alvord desert located southeast of Steens Mountain, KTVA reported.

Lieutenant Undersheriff Brian Needham told KTVA that the sheriff’s office and Bureau of Land Management are investigating the incident.

The Alvord desert is a popular spot for attempting to break land speed records — Kitty O’Neil set the women’s land speed record there in 1976, reaching 512.7 mph in a three-wheeled vehicle.

Combs was attempting to dethrone O’Neil as the “fastest woman on Earth.”

That attempt in 2013 was successful. Combs clocked a new record at 393 mph before later breaking her own record in 2016 with a speed of 440 mph. She was known as the fastest woman on four wheels.

In October of 2018, Combs managed to pilot the North American Eagle Supersonic Speed Challenger to 483.227 mph in a shakedown run. This would have served as the first of two back-to-back runs (in opposite directions) needed to set an official speed record had the car not experienced mechanical troubles that required Combs to end the run prematurely.

Combs was no stranger to risk, and in a post about her 2018 attempt, she reflected on the luck she experienced during her 2016 run.

“It has be a long 2 year stretch since we last set out to drive faster than ever before. If you remember, the previous attempt ended in the bushes and I have God to thank for keeping the car and myself alive,” Combs wrote.

But risk would never stop Combs from chasing her dreams and certainly never limited her endeavors. Her love of motorsports and all things automotive guided her extraordinary life from her earliest days.

“With a lifelong desire to become a race car driver, this fearless young lady found a love for speed and its machines at a very young age. Her family explored everything around them and gave her a solid appreciation for off-roading as well as racing in many forms,” her bio page reads.

As she was building a career, she moved to Laramie, Wyoming to attend WyoTech, where she studied Collision/Refinishing, Chassis Fabrication, Street RodFabrication, and Trim/Upholstery, graduating at the top of her class with a degree in Custom Automotive Fabrication.

Her automotive expertise and vibrant personality led her to venture into a television career as well. She served as co-host of Extreme 4x4 for four years, hosting more than 90 episodes during which she built everything from race trucks to street trucks to trailers. She also did a brief stint as host and builder on Mythbusters in 2009, and she has been featured on shows such as All Girls Garage and Overhaulin.

Combs will be remembered as a legend by her fans in the automotive and motorsports world.