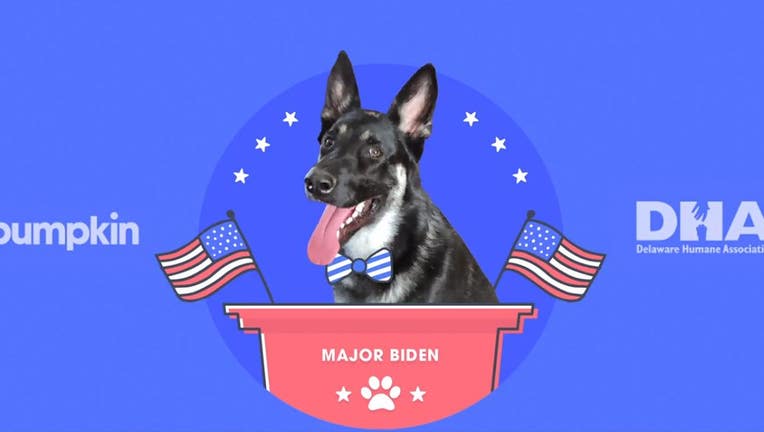 WILMINGTON, Del. - President-elect Joe Biden’s rescue dog, Major, received his own swearing-in to the White House on Sunday, which included a fundraiser for the shelter from which he was adopted, as well as a performance by singer-songwriter and dog lover Josh Groban.

The virtual "indoguration" was held by the Delaware Humane Association and Pumpkin Pet Insurance. The Biden family adopted Major in 2018 after the association posted on social media that it received a litter of sick German Shepherd puppies. The Bidens fostered the puppy for several months before making the adoption official.

"It means everything to us because it shines a light on the good work we do here every day, and the good work that all shelters and rescue groups in Delaware and across the country do," said Patrick Carroll, Delaware Humane Association’s executive director, said of the "indoguration" event.

"It shows that shelters are a wonderful place to adopt and are a valuable community resource for pet owners," Carroll added.

The Delaware Humane Association raised more than $200,000 from the event, a virtual "pawty" attended by more than 7,400 people. Carroll said the funding will enable the rescue shelter to "remain stable" and continue providing its services, citing a challenging past year during the ongoing coronavirus pandemic.

"The human-animal bond is strong and goes beyond political differences, race and ethnicity, and socioeconomic status. People’s love of animals has a way of bringing folks together and unifying one another," he added. 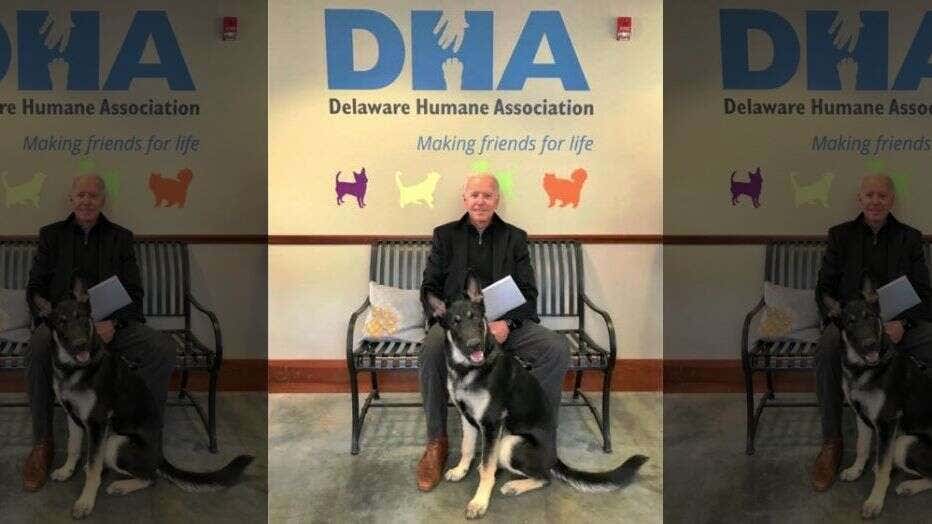 President-elect Joe Biden is pictured with his rescue dog, Major, at the Delaware Humane Association.

Rounding out the Zoom ceremony was Groban, who performed a special version of "(How Much Is) That Doggie in the Window?" The event also named a new "Secretary of Rescue Dogs," a therapy dog named Harper.

Major made headlines last year after a play date with Biden ended when the 78-year-old fractured his right foot.

The Bidens have another dog, Champ, who was acquired after the 2008 election. They have said they’ll be bringing both their dogs to the White House and also plan to get a cat.

The arrival of the Biden pets marks the next chapter in a long history of pets residing at the White House after a four-year hiatus during the Trump administration.

President Theodore Roosevelt had Skip, who is described by the White House Historical Association as a "short-legged Black and Tan mongrel terrier brought home from a Colorado bear hunt." Warren G. Harding had Laddie Boy, who sat in on meetings and had his own Cabinet chair.

Commander in chief’s best friend: A look back at presidential pets

For the first time in a very long time, the White House is presidential pet free.

And President Franklin Delano Roosevelt had his beloved terrier Fala. At night, Fala slept in a special chair at the foot of the president’s bed.

When he declared victory in the 2008 presidential race, Barack Obama told his daughters: "You have earned the new puppy that’s coming with us to the White House." Several months later, Bo joined the family, a gift from Sen. Ted Kennedy. A few years later, fellow Portuguese water dog Sunny would arrive to provide companionship.