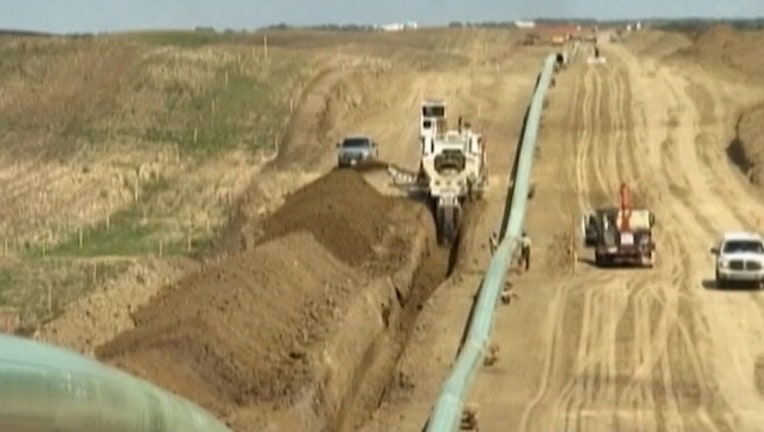 Crews shut down the pipeline Thursday morning and activated emergency response procedures after a drop in pressure was detected resulting from the leak south of a pump station in Marshall County, TransCanada said in a statement. The cause was being investigated.

Discovery of the leak comes just days before Nebraska regulators are scheduled to announce their decision Monday whether to approve the proposed Keystone XL oil pipeline, an expansion that would boost the amount of oil TransCanada is now shipping through an existing line known simply as Keystone. The expansion has faced fierce opposition from environmental groups, American Indian tribes and some landowners.

Brian Walsh, an environmental scientist manager at the South Dakota Department of Environment and Natural Resources, said the state has sent a staff member to the site of the leak in a rural area near the border with North Dakota about 250 miles (402 kilometers) west of Minneapolis.

"Ultimately, the cleanup responsibility lies with TransCanada, and they'll have to clean it up in compliance with our state regulations," Walsh said.

TransCanada said in its statement that it expected the pipeline to remain shut down as the company responds to the leak. It did not offer a time estimate, and a spokesman didn't immediately return a telephone message from The Associated Press.

The federal Pipeline and Hazardous Materials Safety Administration didn't immediately return an email requesting additional information from The AP. Since 2010, companies have reported 17 spills bigger than the leak announced Thursday, topping 210,000 gallons (5,000 barrels) of crude oil or refined petroleum products, according to U.S. Department of Transportation records reviewed by The Associated Press.

The existing Keystone pipeline transports crude from Canada to refineries in Illinois and Oklahoma, passing through the eastern Dakotas, Nebraska, Kansas and Missouri. It can handle nearly 600,000 barrels daily, or about 23 million gallons. TransCanada says on its website that the company has safely transported more than 1.5 billion barrels of oil, or about 63 billion gallons, through the system since operations began in 2010.

President Donald Trump issued a federal permit for the project in March even though it had been rejected by the Obama administration. The Keystone XL project would move crude oil from Alberta, Canada, across Montana and South Dakota to Nebraska, where it would connect with existing pipelines feeding refineries along the Gulf Coast.

Kent Moeckly, a member of conservation and family agriculture group Dakota Rural Action who opposed the pipeline, said he drove to land he owns near the site of the spill Thursday.

"There's a heck of a south wind up here today, and man it just stunk of crude oil," said Moeckly, whose property is crossed by the pipeline. "A mile away, but I'll tell you it was like it was next door."

A leak and spill in southeastern South Dakota in April 2016 prompted a weeklong shutdown of the pipeline. TransCanada estimated that just under 17,000 gallons (405 barrels) of oil spilled onto private land during that leak. Federal regulators said an "anomaly" on a weld on the pipeline was to blame. No waterways or aquifers were affected.

TransCanada said at the time that the leak was the first detected on the pipeline since it began operating, though there had been leaks at pumping stations. One of those leaks happened in southeastern North Dakota in May 2011, when 14,000 gallons (333 barrels) spilled after a valve failed at a pumping station near the South Dakota border.

Sierra Club Beyond Dirty Fuels campaign director Kelly Martin said in a statement that the only way to protect against leaks in the future is for Nebraska to reject the Keystone XL pipeline.

"We've always said it's not a question of whether a pipeline will spill, but when, and today TransCanada is making our case for us," Martin said.