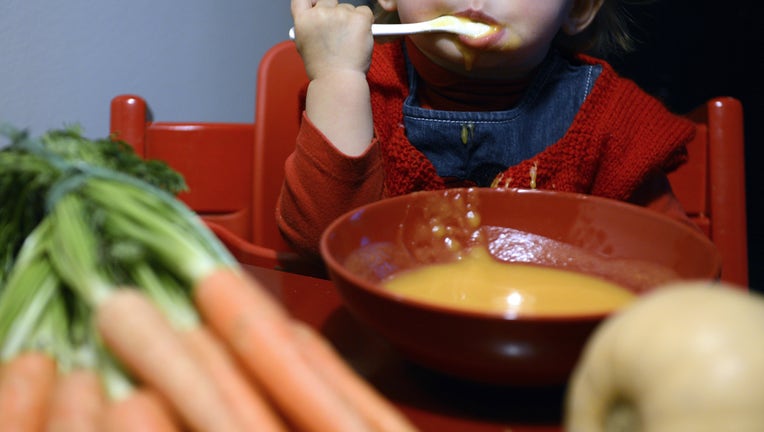 A child eats a vegetables soup on January 24, 2013 in Lyon, Central France. (Photo by PHILIPPE DESMAZES/AFP via Getty Images)

LONDON - A new study finds that children on vegan diets have better heart health and less body fat than their omnivorous peers, but their diets could affect growth, bone mineral content and micronutrient status.

Researchers with the Univesity College London Great Ormond Street Institute of Child Health and the Children’s Memorial Health Institute in Warsaw, Poland unveiled their peer-reviewed findings on Thursday. It was also published in the American Journal of Clinical Nutrition, according to the group.

The study involved recruiting 187 5 to 10-year-olds in Poland from 2014 to 2016.  Of those, 63 children were vegetarians, 52 vegans and 72 omnivores. Researchers collected data on growth, body composition, cardiovascular risk, and micronutrient status in vegetarian or vegan children and compared them to the group of children who consumed meat in their diet.

Researchers found that children on vegan diets were "on average 3 cm shorter, had 4-6% lower bone mineral content and were more than three times more likely to be deficient in vitamin B-12 than the omnivores."

"At the same time, they also had 25% lower levels of low-density lipoproteins (LDL) - the unhealthy form of cholesterol and lower levels of body fat," according to the study.

"We found the vegans had higher intakes of nutrients that indicated an ‘unprocessed’ type of plant -based diet, which is in turn linked to lower body fat and better cardiovascular risk profile,"  Dr Małgorzata Desmond of UCL said. "On the other hand, their lower intakes of protein, calcium, and vitamins B12 and D may explain their less favourable bone mineral and serum vitamin concentrations."

The study also found children on vegetarian diets had a lower risk of nutritional deficiencies compared to other omnivores, but a less healthy cardiovascular profile.

"We were initially surprised by the poor cardiovascular health profile of the vegetarian children, but their dietary data showed that they were eating a relatively processed type of plant-based diet, with less healthy levels of fibre and sugars compared to the vegans," the doctor continued. "So, we are learning that just eating plant-based diets is no guarantee of health, we still need to select healthy foods."

The team said supplementary vitamin B12 and vitamin D on plant-based diets are still needed and that more needs to be done to raise awareness of this among families of vegetarian and vegan children.