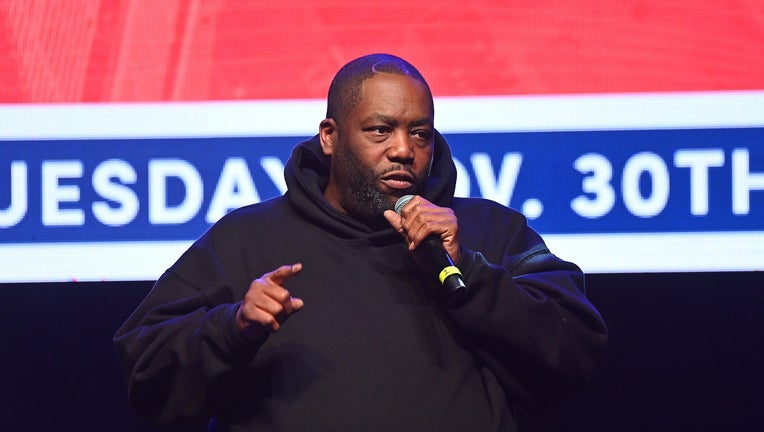 Rapper Killer Mike speaks onstage during Get Out To Vote Concert & Rally at Center Stage on November 28, 2021 in Atlanta, Georgia. (Photo by Paras Griffin/Getty Images)

ATLANTA - Atlanta rapper Killer Mike said someone vandalized his barber located on Edgewood Avenue in Atlanta and while he’s mad, he said he wants to reach one of the vandal’s family members to get him the mental health he needs.

Killer Mike, born Michael Santiago Render, posted photos on his Instagram of the graffiti scrawled across the front of The SWAG Shop. Some of the words are vulgar while most are incomprehensible.

"A mentally disturbed White Man who Calls himself ‘Druce Wayne’ did this to our Shop downtown. He lives in the delusion he is Kurt Cobain and somehow I am involved in a conspiracy to keep him silenced," the Atlanta native explained. "I am angry and beyond upset. With that said I know I can fix this physical damage BUT this man's mind is terribly broken."

The 46-year-old rapper, actor, and activist, who has long advocated to end systemic prejudices, doesn’t want to seek vengeance, only justice. And that justice, he said, comes in the form of getting the man the help he needs. He put out a plea to help find the man’s family sharing a couple of images of the man’s face.

"If u are from OKC and know his family or friends please DM so u can get him some help. I will for sure make sure we get this fixed and I encourage all to check on your mentally ill loved ones because the world may not be as understanding as me," he wrote. "Love and Respect. Thank "Kinfolks" of Edgewood for making sure we know the real deal…No worries #TheSWAGshop will be ok and Happy Kwanzaa to ya'll!"

In February, The SWAG Shop location along Roosevelt Highway in South Fulton was forced to permanently close due to the storefront being shot up. The location had been closed due to the pandemic and was looking to reopen when the shooting occurred.

His other active location is inside State Farm Arena.