Gordon Silver captured this video of two alligators 'getting acquainted,' as he called it, in Lakewood Ranch.

LAKEWOOD RANCH, Fla. - Another day, another alligator sighting in Florida.

The video starts with a low growling sound as the two reptiles appear next to each other on the water's edge. Soon both open their jaws and latch onto one another, tumbling three times as they splash next to the shore.

"Didn't have to leave my back yard to capture these 2 gators tossing each other around at the beginning of the 2021 mating season," Silver wrote in the video's caption.

He says you can often see the large reptiles in the area, "along with just about every other kind of wildlife." 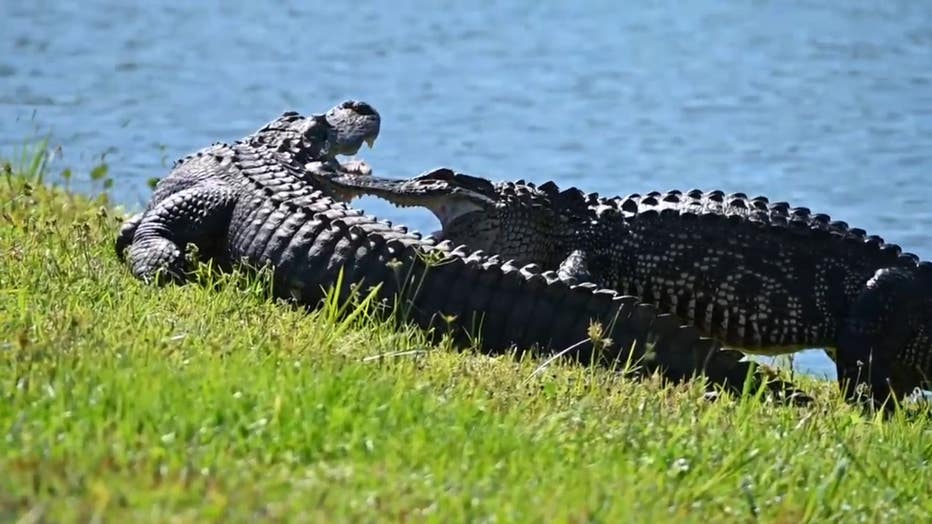 "When I heard the gator mating call from inside my home, I immediately grabbed my camera and dashed outside to investigate," he told FOX 13. "I'm a big nature photographer and capturing wildlife right from your own backyard is something I always wanted to do."

Springtime means love is in the air -- even for alligators.

By late June or early July, female gators will lay between 32 to 46 eggs. Incubation periods for alligators take about 60 to 65 days, and baby gators will be born in late August or early September, according to the Florida Fish and Wildlife Conservation Commission.

It's one of the best places in Florida to spot alligators, and when the conditions are right, they come out in droves.

Down in Florida, more gators are out and about as they search for love, and seeing them on a golf course is not an unusual sight nowadays.