Phillip Chippewa, 54, matched all of the winning numbers and the Powerball in the Sept. 21 drawing to win, lottery officials ﻿said﻿.

SUTTONS BAY, Mich. - A Michigan man with seven children and 21 grandchildren is not only “rich with family,” but is also now rich with cash after winning an $80 million Powerball jackpot.

Phillip Chippewa, 54, of Suttons Bay, matched all of the winning numbers – 01-09-22-36-68 – and the Powerball 22 in the Sept. 21 drawing to win the big prize from the Michigan Lottery, officials said. He bought the winning ticket at a Barrels & Barrels party store in his hometown, located about 20 miles north of Traverse City. 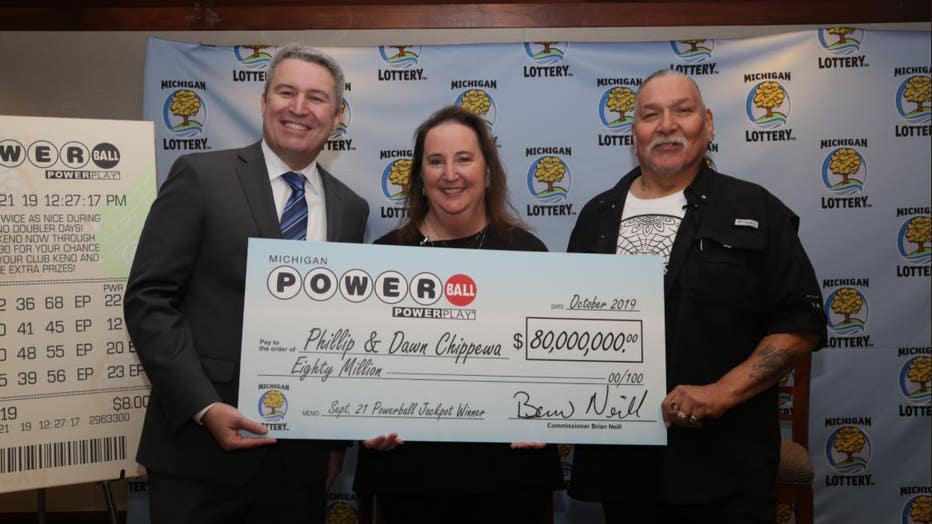 “Any time I see the jackpot getting up there I buy a few tickets and hope for the best,” Chippewa said in a press release. “I stopped at Barrels and Barrels the day of the drawing and almost walked out without buying the tickets, but at the last minute, I decided to get four plays.”

And good thing he did. The next day, he and his wife, Dawn, learned that someone who played the lottery at Barrels & Barrels had won the Powerball jackpot.

“My first thought was: ‘He better have bought some tickets!’” Dawn said.

Phillip said he had put the tickets away in his truck after buying them and quickly went to check.

“I ran out to take a look at them and I didn’t have to look past the first line to see I was the winner,” he explained. “Of course, my wife and son thought I was playing a trick, so my son pulled the numbers up on his phone and read them out loud while Dawn and I looked at the ticket together. By the time he was done, we both had tears in our eyes.”

The couple drove to the store with their ticket to confirm they had won.

“As soon as we walked in the clerk asked: ‘Are you guys the big winners?’ said Phillip. “I handed him the ticket and said: ‘We’re about to find out.’ When the terminal printed a receipt saying to contact the Lottery, we knew our lives had changed.”

The couple called a family meeting with their children to share the good news, adding that there were a lot of emotions in the room.

“With seven children and 21 grandchildren, I’ve always said that I might not have the most money, but I am rich with family,” Phillip said. “Now, I have all the money I’ll ever need and can help my family for generations. That means everything to me.”

Phillip chose to receive the $80 million jackpot as a one-time lump sum payment of $55.3 million, rather than an annuity. After tax withholdings, he will receive about $42 million, officials said.

He plans to buy homes for himself and each of his children and continue to share his winnings with his family. He’d also like to purchase a new Harley-Davidson motorcycle and a white Dodge Challenger, he said.

“Winning is life changing, but it’s not going to change who we are,” said Phillip, who is a member of the Grand Traverse Band of Ottawa and Chippewa Indians. “My wife and I have been together for 25 years, we’ve always helped others and we’re both still working.

“Every day when I come to work my boss asks me: ‘Why are you here?’ I just tell him that I was hired to do a job and I’m not going to abandon anyone just because I won. We’ll both retire in time, but we believe in being good to the community that has been so good to us.”