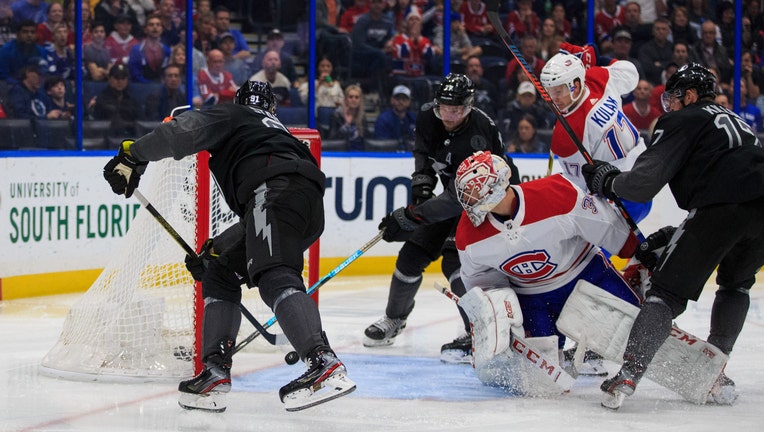 TAMPA, FL - DECEMBER 28: Steven Stamkos #91 of the Tampa Bay Lightning shoots the puck for a goal against goalie Carey Price #31 of the Montreal Canadiens during the second period at Amalie Arena on December 28, 2019 in Tampa, Florida (Photo by Mary

Steven Stamkos had a goal and an assist to reach 800 career points, and Mitchell Stephens scored for the first time in his career as Tampa Bay leapfrogged Montreal for fourth place in the Atlantic Division. Andrei Vasilevskiy made 39 saves.

Jesperi Kotkaniemi, Ben Chiarot, Jordan Weal and Max Domi scored for Montreal, which had won five of of its past six road games. Carey Price stopped 25 shots.
Montreal out-hustled Tampa Bay to every loose puck early and forcing the Lightning into turnovers. In the opening 12:24, Montreal scored twice and registered 18 shots on goal before Tampa Bay even tested Price.

Kotkaniemi finished off a broken play and snapped a wrist shot through the legs of Erik Cernak and beat Vasilevskiy up high on the first shot of the game at 2:08. Domi doubled the lead on a shot that was initially ruled no goal as play continued for 62 seconds before the horn stopped play for a review that determined the puck crossed the line.

Tyler Johnson registered the first shot on goal for Tampa Bay at the 12:25 mark, and Killorn made it 2-1 with 59 seconds left in the period.
Stamkos tied it 1:34 into the second period when his initial shot hit the glass behind the net and caromed back out in front, where he was able to bat the puck out of the air He's the third player in franchise history to reach 800 points, joining Martin St. Louis and Vincent Lecavalier.

Stephens put Tampa Bay in front at 4:56. After Killorn scored his second of the game at 12:00, the Canadiens called a timeout and responded off the faceoff when Chiarot cut down from the left point to put in a rebound of Brendan Gallagher’s shot.

Anthony Cirelli regained the two-goal lead with a rebound 55 seconds into the third period before Weal scored a power play goal with 1:28 left in the third.
Notes: Lighting C Tyler Johnson appeared in his 500th career game, returning to the lineup after missing the previous game with a lower-body injury. ... Kotkaniemi returned after missing eight games due to a concussion. ... Domi has goals in four consecutive games. ... Montreal C Joel Armia is week-to-week with a hand injury. ... Canadiens’ D Shea Weber appeared in his 200th game with Montreal.

UP NEXT
Lightning: Host Detroit on Sunday.
Canadiens: At Florida on Sunday.
___
More AP NHL: