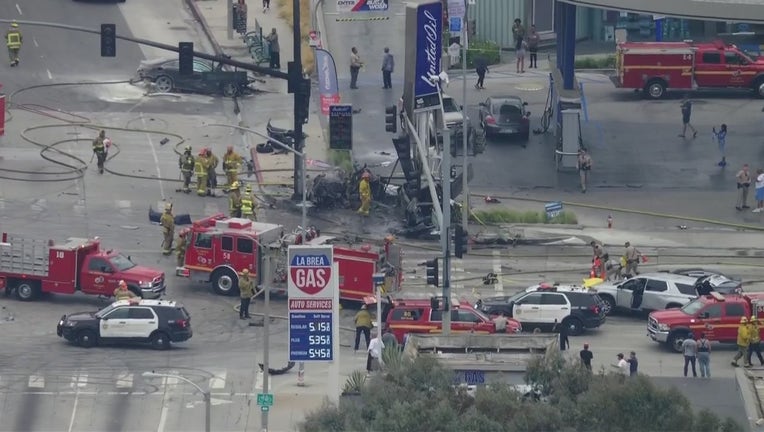 Five people are dead after a car crash in West Los Angeles on Thursday. (KTTV-TV)

The female driver behind the wheel of a Mercedes-Benz that plowed into a Windsor Hills intersection, causing a fiery multi-car crash that killed six people, including an infant and a pregnant woman, was arrested on Friday, according to the California Highway Patrol.

Criminal charges are pending against 37-year-old Nicole Lorraine Linton. She was being treated at Ronald Reagan UCLA Medical Center for major injuries sustained in the crash, according to the CHP. Charges will be forwarded to the Los Angeles County District Attorney Office for vehicular manslaughter with gross negligence.

Investigators said that the driver was going over 100 miles per hour, in a 35 mph zone, when she plowed into the intersection of S. La Brea and Slauson avenues around 1:30 p.m. Thursday.

Video from the scene showed the Mercedes-Benz driving at a high rate of speed, running a red light at the intersection and crashing directly into a dark-colored sedan, which in turn struck several other vehicles. The Mercedes-Benz and two other vehicles burst into flames following the collision, and the wreck came to a stop at the southwest corner of the intersection after striking a gas station sign.

"Due to extensive fire damage, it is unknown at this time the make and model of the involved vehicles and which vehicles the involved parties were traveling in," the CHP reported.

Authorities Friday began to identify the victims killed in the crash. The pregnant woman who was killed in the crash was identified Friday by the Los Angeles County coroner's office as Asherey Ryan, 23, of Los Angeles. Her unborn child, listed by the coroner's office as "baby boy Ryan," was also counted among the deceased. Family members told FOX 11 that Ryan's infant son was also killed.

It was initially believed five people were killed in the horrific crash. However, the CHP reported the sixth death after crews found a body inside one of the burning vehicles, CHP said.

An additional eight people were injured in the crash, including six minors and two adults. All the surviving victims were taken to the hospital, according to the Los Angeles County Fire Department. They range in age from one to 33-years-old.

LINK: Get updates and more on this story from FOXla.com.