COLUMBUS, Ohio (AP) - There should be a federal investigation into the fatal shooting of Ma’Khia Bryant by a Columbus police officer, along with a probe into the handling of Bryant’s foster care placement, a lawyer representing the teen's family said Wednesday.

Attorney Michelle Martin wouldn't discuss details of why Bryant was in foster care, but said she was there too long.

Bryant "was a 16-year-old vibrant, bubbly girl, whose life was cut short by many of our failing systems," Martin told reporters Wednesday. "We are going to investigate every agency that had the time and the opportunity to prevent Ma’Khia’s death."

In addition to a federal probe, Martin wants an investigation of Ohio's health and human services agency, which oversees the foster care system.

Bryant’s father, Myron Hammonds, and her paternal grandmother, Jeanene Hammonds, were present at the conference and spoke about the pain of losing the teenager.

"To know Ma’Khia is to know life," said the father, who was on the scene the day his daughter was shot. "She was with me for 16 years and she was my peacemaker."

Bryant’s two younger sisters, Janiah and Azariah Bryant, were also at the press conference. Martin did not allow the minors or other family members to speak about the day of the shooting or what they saw, citing the family's independent investigation into what happened.

Bryant died April 20, less than an hour before the guilty verdict in Derek Chauvin's murder trial of George Floyd. Columbus police officer Nicholas Reardon fired four shots at her as she swung a knife at a young woman. Reardon is white and Bryant was Black.

Critics of police use of force and witnesses of the shooting — including Bryant's father and grandmother — have demanded to know why the officer didn't use other tactics to stop Bryant short of shooting her, such as deploying a stun gun. 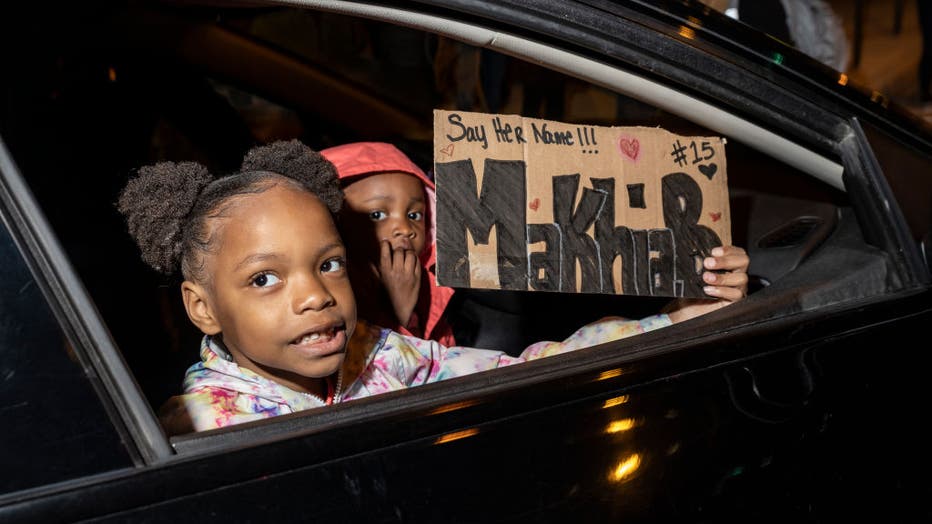 Children carry a sign at a Black Lives Matter protest as it makes it's way through downtown in response to the police shooting of MaKhia Bryant on April 21, 2021 in Columbus, Ohio. The 16-year-old Black girl was shot and killed by police who had been

But many use of force experts and even some civil rights attorneys have said the officer followed his training and may have saved the girl Bryant was attacking. The national Fraternal Order of Police, called the shooting "an act of heroism, but one with tragic results."

Events leading to the shooting began late in the afternoon after someone in Bryant's foster home — it's still unclear who — called 911 and said someone was trying to stab people in the house.

Reardon, who has been on the force since December 2019, was dispatched three minutes later.

"Hey, what’s going on?" Reardon asked upon exiting his vehicle.

In the next 11 seconds, Bryant was seen charging at 20-year-old Shai-Onta Lana Craig-Watkins with a kitchen knife and then moving on to 22-year-old Tionna Bonner before Reardon yelled, "Get down!" and fired four consecutive shots into Bryant’s chest.