Footage from the Manatee County Sheriff's Offices shows deputies' efforts to track down a homeless man who was stuck in a creek.

BRADENTON, Fla. - When a homeless man tried to bathe in a creek, he got stuck for two days. It wasn't until Manatee County deputies arrived that he was rescued -- an effort caught on dramatic bodycam video.

The sheriff's office said the incident occurred on Nov. 18. Around 1:30 a.m. that day, deputies responded to a call from Mike's Mini Mart along 15th Street East in Bradenton. A resident told the first responding deputy they heard someone yelling for help on the other side of the road in a wooded area.

Deputy Dwight Roberts ventured through the woods and found a partially-clothed man in about two feet of water underneath a railroad bridge. The sheriff's office said the man couldn't move and claimed he'd been stuck in the creek for two days.

READ: Resident finds body in trashcan being stored under their carport, detectives say

According to deputies, the man told them he called for help during those couple of days, but no one responded until that day. The man was homeless and said he'd attempted to take a bath in the creek but fell.

He couldn't stand up due to a previous leg injury.

Deputy Roberts contacted first responders. An EMS crew and other deputies, including deputies Tara Burge and Brittany Carannante, helped lift the man from the water, along with some bystanders and neighbors.

Because of the wooded area and rough terrain, a stretcher couldn't reach the location, the sheriff's office said. Therefore, deputies used a blanket to carry him 250 yards down the railroad track. In the body camera video, Deputy Roberts is seen heaving the homeless man over his shoulders and carrying him out of the creek.

As the deputies carry the blanketed man out, he says, "I really appreciate this, man."

A resident offered a wheelchair for the final leg of the journey.

The man, who was not identified, was taken to a nearby hospital. Deputies said parts of his body were waterlogged and some of his skin was coming off. He showed early stages of hypothermia and could not feel his legs. 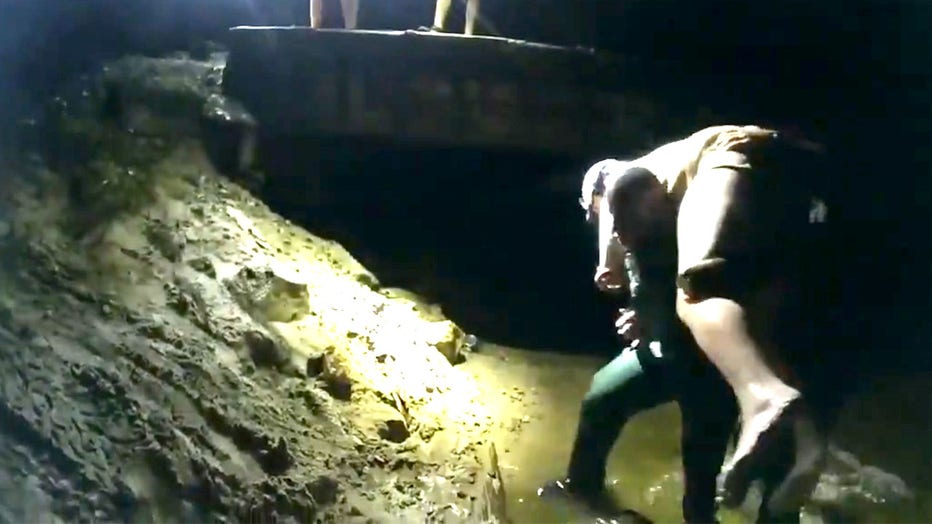 A Manatee County deputy is seen carrying the man up the bank of the creek.

"His skin is literally peeling off of his feet," one deputy is heard saying in the body camera video.

“When you watch the video and you watch the lengths that these deputies went to…it just made me proud of everything that they did to help this man. It just kind of shows all of us what they go through each and every day,” the sheriff added.

"He was pretty heavy, I can say that," Roberts chuckled. "But, we got him out of the water, got him to safety, and I believe he's going pretty well now."