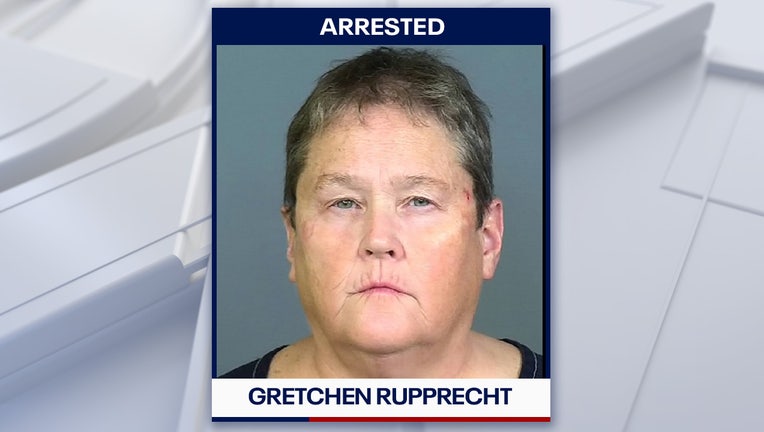 PALMETTO, Fla. - Deputies arrested a Manatee County jail employee after they say she smuggled illegal drugs into the jail and gave them to inmates.

According to investigators, last Sunday deputies inside the jail noticed an inmate who appeared to be impaired. They began to question him and took him to get medical help to figure out what was going on.

Sheriff Rick Wells says the inmate admitted to taking drugs and a search of his cell revealed a vape pen containing THC and delta 8.

After making this discovery, detectives were called in to check the pods and found more vape pens, as well as a few eye drop containers with a clear liquid inside that, tested to be methamphetamine.

As detectives began talking to the inmates, they kept bringing up the name "Granny."

"The inmates talking to the detectives kept saying that "Granny" was working in the kitchen and kept bringing contraband into the facility. She would give the contraband to Corey Cruz, who was really the ringleader of this little, illegal drug operation," stated Sheriff Wells.

Wells added that "Granny," whose real name is Gretchen Rupprecht had been working in the kitchen of the jail for about a year and a half. He says she befriended Cruz, who also worked in the kitchen and would meet up with one of Cruz’s contacts outside of the jail to purchase the contraband. According to Wells, Rupprecht was paid $25 per meeting, for a total of $100 for four meet-ups.

Manatee County Sheriff Rick Wells provides an update after a cook at the county jail was arrested for giving contraband to inmates.

"That’s a heck of a price to pay to land in jail for a woman who is 64 years of age and has never been incarcerated before. That’s mind-blowing to me," Wells stated. "But, that was a choice she made."

Wells says Rupprecht would smuggle the contraband into the jail inside her purse, put it in coolers and then Cruz would take it to his cell.

"She disgraced the agency," Wells commented. "She really disgraced the men and women who work at the Manatee County Sheriff’s Office, who really do an excellent job taking care of the inmates and feeding them and doing everything we have to do."

According to Wells, Rupprecht was arrested Thursday night on her way to work. He said she confessed to her involvement in the drug ring and was honest about her involvement.

"’Granny’ is now sitting in jail, eating the same food that she would once prepare," Wells said.

"She fell for him. She wanted to help him. She thought she was doing something good for him and now she’s sitting in jail not too far from him," Well said.

Cruz will be charged with conspiracy to introduce meth into a county detention facility and possession a controlled substance.

"We have a lot of trust that we put into our employees," Wells stated. "They come into that kitchen and do a great job. This is the first time we’ve had a problem with someone bringing something into the facility and giving it to the inmates. There are some security protocols that will now be in place because of her."