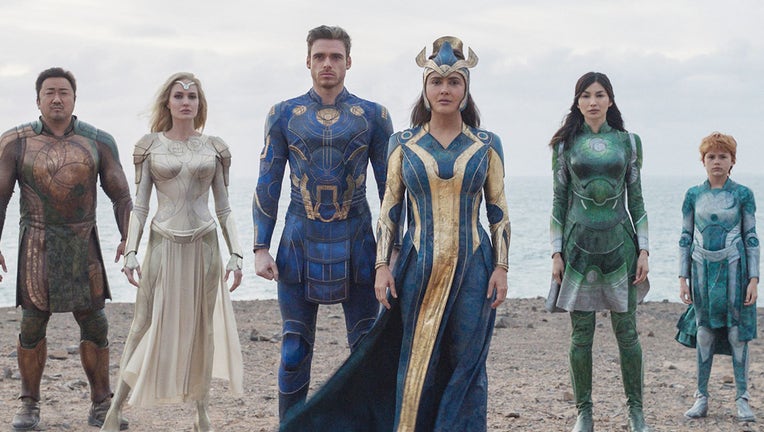 CHICAGO - The initial experience of watching "Eternals" is overwhelming. Though writer/director Chloé Zhao’s thinky sci-fi action melodrama may not draw much plot from the 25 Marvel Cinematic Universe films that have come before, it introduces 10 main characters, covers 7,000 years of human history and runs a lengthy 157 minutes.

There’s at least a movie and a half’s worth of story here about the immortal super-powered aliens who have been gently guiding humanity’s evolution since they first arrived to beat some alien beasties back in 5000 BC Babylon. Coupled with a tone that’s more ponderous than quippy, "Eternals" makes for an alienating first watch.

That could be why the movie has been met with such a divisive reaction. Dig a little deeper, however, and this behemoth of a superhero flick has its rewards too.

It’s not just that Zhao has purposefully diversified what superhero line-ups traditionally look like, it’s that she’s radically changed the tone in which these sorts of stories usually operate. In place of quips, conflict and macho posturing, "Eternals" is about collaboration, cooperation and empathy. It’s a superhero blockbuster that filters its questions of power and purpose through a feminine lens rather than a masculine one.

And that makes for a welcome change of pace, even when the movie stumbles.

About ‘Eternals’: A different kind of superhero

The theme of feminine power starts with Ajak (Salma Hayek), the team leader with a warmly maternal energy. She’s not a fighter but a healer. And when disagreements arise, she’s willing to hear out her metaphorical children rather than just shut them down.

Sent by the godlike Celestial Arishem to kill monstrous creatures known as Deviants, the Eternals complete their mission circa 1521. From there, Ajak encourages the group to find their own paths in life —empowering them rather than trying to control them.

The film’s flashback structure reveals that the ageless aliens have spent the past 500 years engaging with humanity (or not) on their own terms. Some, like stoic Superman-esque Ikaris (Richard Madden), brooding mind-controller Druig (Barry Keoghan) and spunky speedster Makkari (Lauren Ridloff) have largely kept to themselves. Others have taken up jobs or started families, like Brian Tyree Henry’s Phastos, the first major gay character in the MCU. One has even become a famous Bollywood star (that’d be Kumail Nanjiani’s winning Kingo).

So when a crisis forces the long-separated crew back together, they each bring those unique lived-experiences to the film’s central question: Is humanity worth saving? And at what cost?

See ‘Eternals’ for: The ambitious ideas hidden beneath its overstuffed surface

Intriguingly, Zhao doesn’t suggest there’s only one right answer here. But she gives the question a fulcrum point in Sersi (Gemma Chan), the empathetic Eternal who’s always had a soft spot for humans.

Thrust into a leadership role that no one, including herself, seems to think she’s right for, Sersi brings a new point of view to the team’s god-given mission. Just because a way of doing things is old and traditional, is it inherently natural? Or is it violent and archaic?

Though Chan isn’t the strongest actor of the bunch, she projects a bookish, overlooked middle sister quality that fits well with Zhao’s interrogation of what leadership looks like. There’s also a compelling parallel through-line for Angelina Jolie’s Thena, a legendary warrior who finds herself suffering from a memory loss condition that robs her of her sense of self. As with Sersi’s story, it’s another chance for Zhao to examine what it means for a woman to step into her power, even if it winds up feeling somewhat detached from everything else going on.

In fact, "Eternals" is a movie with so much on its mind that it’s hard to know where to look sometimes. It doesn’t help that the Oscar-winning director of "Nomadland" has a fondness for tableau-style staging that can look gorgeous in the moment (particularly when filmed on the sort of natural landscapes rarely seen in the MCU), but also becomes a hinderance to fleshing out real human connection between her cast.

A central love story for Ikaris and Sersi, for instance, falls flat because it’s largely conveyed through statuesque poses rather than lived-in interactions.

There are other weaknesses too. The fight scenes often devolve into weightless CGI and the comedy is hit or miss. And it really can’t be overstated that there are just way, way too many characters in this thing. (Other Eternals include Don Lee’s brawler Gilgamesh and Lia McHugh’s childlike Sprite).

Still, "Eternals" is overstuffed and thematically ambitious in a way that makes it more rewarding on a rewatch, rather than less.

Once you wrap your mind around who these characters are and the basic shape of their mission, it becomes easier to appreciate the philosophical underpinnings of their story. Above all else, "Eternals" is a movie that values the idea of changing your mind and evolving with time. Perhaps that’s a quality that will serve the film’s legacy in the long run too.

Deep Blue Sea (1999): "Deep Blue Sea" is a classic "oh my god that is a giant shark" movie — though it must be said that it’s not exactly high art. Still, this is one that’s definitely better on rewatch, especially if you’re seated next to someone who’s never seen it before. Just make sure to position yourself to watch that person’s reaction when the big Samuel L. Jackson monologue begins. Rated R. 104 minutes. Dir: Renny Harlin. Also features Saffron Burrows, LL Cool J, Thomas Jane and Stellan Skarsgård.

The Freak Brothers (2021): Okay, so it’s actually impossible to rewatch this series in its entirety, as only the first two episodes have premiered. But this animated stoner/time-travel comedy, an adaptation of the cult classic underground comic series, is the kind of show in which you are guaranteed to miss some of the jokes the first time around, because the punchlines come fast and furious. "The Freak Brothers" is a Tubi Original. Rated TV-MA. One season (first two episodes currently available). Featuring: Woody Harrelson, John Goodman, Tiffany Haddish, Pete Davidson, La La Anthony and Adam Devine.

Jupiter Ascending (2015): Like a lot of the Wachowskis’ post-"Matrix" output, "Jupiter Ascending" is the sort of gonzo swing that definitely isn’t for everyone. But once you embrace the unexpectedly earnest tone of this sci-fi fairy tale romance, it has plenty of rollicking action fun to offer on a second viewing. Rated PG-13. 127 minutes. Dir: The Wachowskis. Featuring: Mila Kunis, Channing Tatum, Sean Bean and Eddie Redmayne.