More than a hundred protesters marched down Kennedy Boulevard Monday night to the Tampa PD headquarters, where they were met by a line of Tampa police officers, some in head-to-toe riot gear. The demonstrators were loud, but showed no signs of violence.

The protests moved into Curtis Hixon Park before the curfew began. By about 7:45, most of them had cleared out.

Tampa Mayor Jane Castor and Tampa Police Chief Brian Dugan announced the extended curfew Monday after violent protests and looting that took place Saturday. Several stores were cleaned out by looters and some even set afire after protests in the north Tampa area.

Sunday and Monday were a much different scene, however, with protesters mostly just chanting and holding signs.

The protests are similar to demonstrations taking place across the country in response to the death of George Floyd in police custody.

Chief Dugan has already spoken critically of the Minneapolis officer who was later charged with Floyd’s murder. 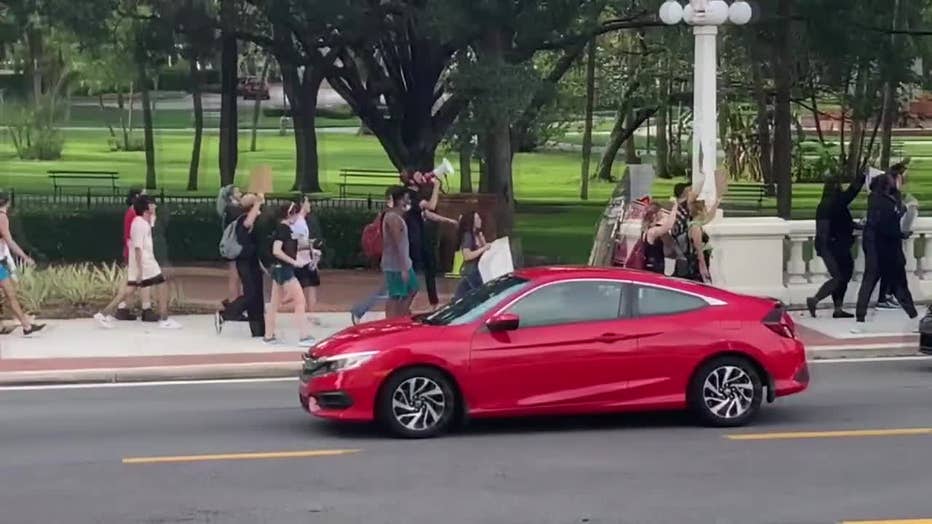 Monday, the chief said he’s willing to continue listening to the protestors who held a peaceful rally during the day Sunday, but also called on everyone to reject violence.

“I will shut up and listen to you, but I cannot listen while we have any civil unrest in our city,” he offered.

"As has always been the case, the individuals that caused problems -- being violent, causing property damage -- are in the minority," the mayor added.

Sunday’s curfew appeared to be successful in helping calm the violence in Tampa. A group of a few dozen demonstrators defied the 7:30 curfew downtown, forcing police to use tear gas at times.

Less than two hours later, after a three-minute warning from the line of officers at the scene, the protesters dispersed peacefully.

PREVIOUS: Quieter night in Tampa, with curfew in effect and police out in force

Mayor Castor, herself a former police chief, said Monday that, in an abundance of caution, the curfew would remain for another night. Between 7:30 p.m. and 6 a.m., residents are asked to stay home, though commuting to and from work is permitted.

The mayor and chief will meet again tomorrow to decide if the curfew needs to be extended later into the week.

The view from several locations where protests turned violent in the north Tampa area Saturday night.