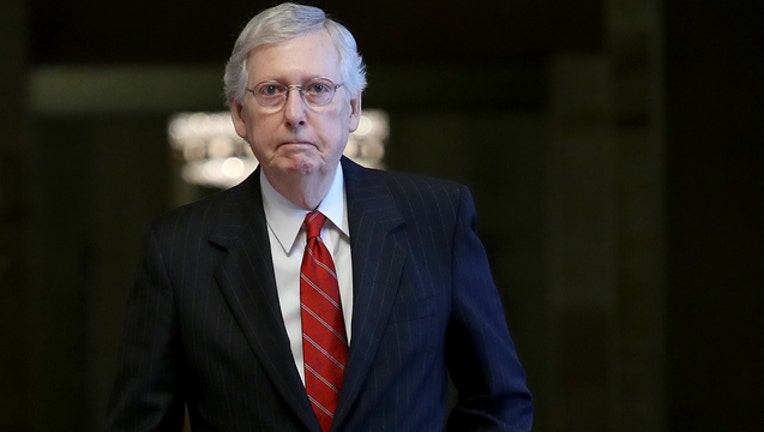 The Republican leader won't be calling senators back to work early, as some are demanding. But he told a Kentucky radio station that President Donald Trump called him Thursday morning and they talked about several ideas. The president, he said, is "anxious to get an outcome and so am I."

Stakes are high for all sides, but particularly for Trump and his party. Republicans have long opposed expanding background checks - a bill passed by the Democratic-led House is stalled in the Senate - but they face enormous pressure to do something after mass shootings in El Paso, Texas and Dayton, Ohio, that killed 31 people. McConnell, who is facing protests outside his Louisville home, can shift attention back to Democrats by showing a willingness to engage ahead of the 2020 election.

"What we can't do is fail to pass something," McConnell said. "What I want to see here is an outcome."

McConnell said he and Trump discussed various ideas on the call, including background checks and the so-called "red flag" laws that allow authorities to seize firearms from someone deemed a threat to themselves or others.

"Background checks and red flags will probably lead the discussion," McConnell told WHAS-AM in Louisville. He noted "there's a lot of support" publicly for background checks. "Those are two items that for sure will be front and center as we see what we can come together on and pass."

Trump has been interested in federal background checks before - and tweeted Monday about them - only to drop the issue later, a turnaround similar to his reversal on gun proposals after the 2018 high school shooting at Parkland, Fla.

The powerful National Rifle Association and its allies on Capitol Hill have long wielded influence, but the gun lobby's grip on Democrats started slipping some time ago, and it's unclear how much sway the NRA and other gun groups still hold over Republicans in the Trump era.

In a joint statement, they said Trump called them individually after Pelosi sent a letter asking the president to order the Senate back to Washington immediately to consider gun violence measures.

Schumer and Pelosi said they told Trump the best way to address gun violence is for the Senate to take up and pass the House bill. Trump, they said, "understood our interest in moving as quickly as possible to help save lives."

The politics of gun control are shifting amid the frequency and toll of mass shootings. Spending to support candidates backing tougher gun control measures - mostly Democrats - surged in the 2018 midterms, even as campaign spending by the NRA declined.

NRA chief Wayne LaPierre said in rare public statement Thursday that some federal gun-control proposals "would make millions of law-abiding Americans less safe and less able to defend themselves and their loved ones."

The organization said proposals being discussed in Congress would not have prevented the mass shootings in Texas and Ohio that killed 31 people.

McConnell has been under pressure from Democrats, and others, to bring senators back to Washington after the back-to-back weekend shootings.

Earlier, more than 200 mayors, including those in Dayton and El Paso, urged the Senate to return to the Capitol. "Our nation can no longer wait," they wrote.

McConnell on Thursday rejected the idea of reconvening the Senate, saying calling senators back now would just lead to people "scoring points and nothing would happen."

Instead, the GOP leader wants to spend the August recess talking with Democratic and Republican senators to see what's possible. Senators have been talking among themselves, and holding conference calls, to sort out strategy.

"If we do it prematurely it'll just be another frustrating position for all of us and for the public," he said.

While many of those proposals have bipartisan support, Democrats are unlikely to agree to them without consideration of the more substantive background checks bill.

"We Democrats are not going to settle for half-measures so Republicans can feel better and try to push the issue of gun violence off to the side," Schumer said Wednesday.

Sen. Joe Manchin, a West Virginia Democrat who, along with Sen. Pat Toomey, R-Pa., is pushing a bill to expand background checks, said Trump's support will be the determining factor in whatever gets done.

"At this point in time leadership comes from President Trump," Manchin said.