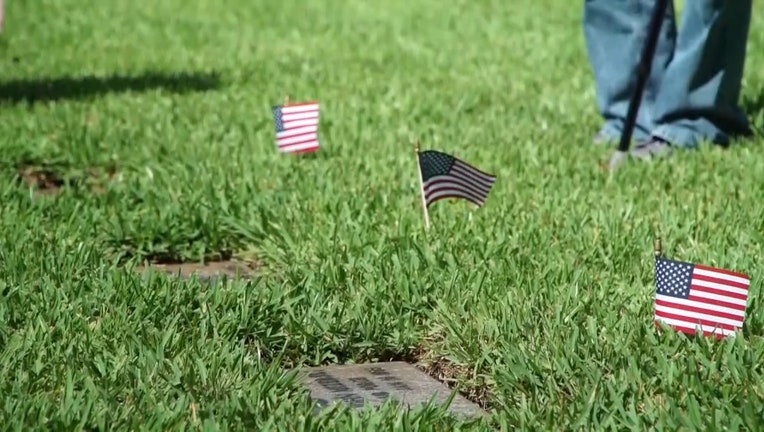 TAMPA, Fla. - In the Bay Area, and across the U.S., people will be honoring those who lost their lives to protect the country -- but this year's Memorial Day ceremonies could look different.

Obviously, a lot of changes have been made in light of the COVID-19 pandemic, and while many won't be seeing Memorial Day services like they usually do every year, that doesn't mean veterans won't be honored.

If you head out to Bay Pines National Cemetery in St. Petersburg, you'll still see th flags by every headstone like you normally do on Memorial Day. Despite the COVID-19 pandemic, volunteers were committed to keeping the tradition going. On Friday,  they spent the day at the cemetery making sure each grave had a flag and each veteran was honored.

Bay Pines' Memorial Day service usually draws hundreds of people who gather to honor the fallen, but this year, you’ll have to enjoy the service online. FOX 13's anchor Mark Wilson will be emceeing the event. It will still be just like a usual service except it will all be virtual.

The memorial will be broadcast at 10 a.m. on the Bay Pines VA Facebook page.

Another service that has been switched over to a virtual memorial -- due to just how many people come out to participate in the ceremony -- is the one normally held at the Florida National Cemetery in Bushnell. It’s usually the biggest Memorial Day service held in Florida.

Of course, this year, they still want all of those people to be able to be a part of the service, it just won't be in-person. They, too, will be braodcasting the Memorial Day Service on their Facebook page starting at 11 a.m. with Major General James Hartsell as their guest speaker.

The American Legion Post 5 in Tampa will be doing something a little special. Usually, they hold ceremonies, but those have been canceled.

Instead, starting at 10 a.m., veterans will head out to cars stopped at the red light on the intersection of Kennedy Boulevard and Dale Mabry Highway, and hand out poppies and a McDonald’s coupon to drivers.

They are also encouraging drivers to stay in their cars and take a short drive through their cemetery to honor those buried there. At noon, the honor guard will raise the flag while playing taps and finish the morning with a 21-gun salute.