ST. PETERSBURG, Fla. - A monument came in for a landing Tuesday at the St. Pete Pier that is dedicated to the first flight of commercial aviation -- which took off from the area.

Back in January 1914, Tony Jannus flew the mayor of St. Pete at the time to Tampa, creating this back-and-forth flight that was really the birth of commercial aviation. The art installment will make sure future generations know the story.

During the morning hours, artists began installing a giant work of art at the pier that commemorates that famous flight. Artists from MGA Studio have been working on it for months.

Taxpayer money was not used, organizers explained. Flight 2014 was the group behind the project that raised the money for it to happen.

"This is also privately-supported here," said Will Michaels, the group's president. "Individuals, businesses, organizations, airlines, the whole community came together and made this happen." 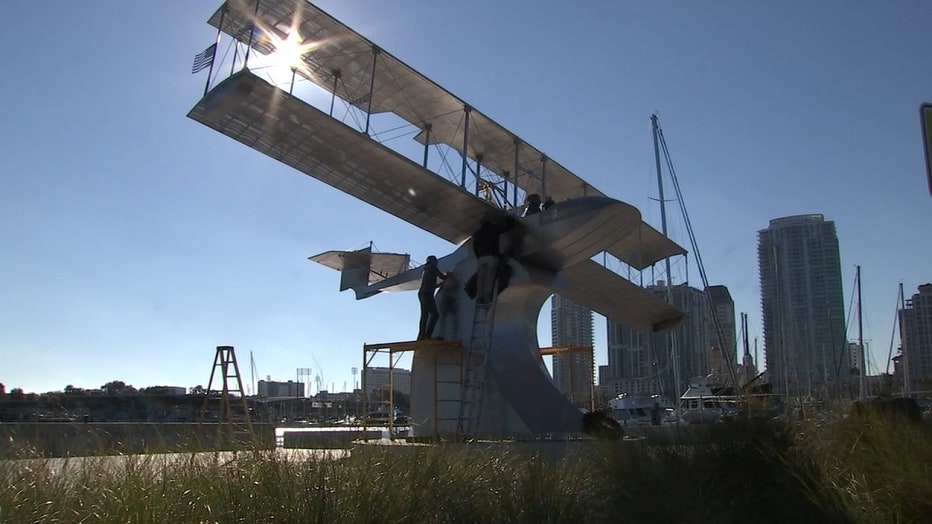 Michaels said the city of St. Petersburg played an important role in aviation history. Back then, a man named Percy Fansler, an engineer from Jacksonville, had an idea.

Fansler pitched the idea to Tom Benoist, an airplane manufacturer in St. Louis. Benoist agreed that it was a great idea.

"They said, 'Let's do it.' They came down to Tampa Bay and ended up being headquartered right here in St. Petersburg," Michaels said. "The original hangar was right on this spot where the monument is up." 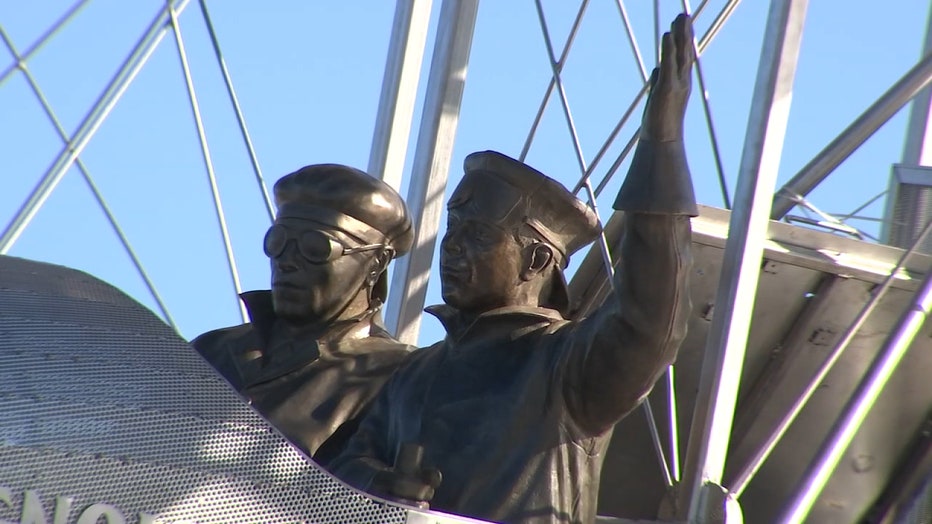 The monument is a full-size replica of the plane flown by Jannus. On that first flight, the mayor paid $400 to be the first passenger. The sculpture has a 45-foot wingspan and weighs 16,000 pounds.

In the early 1900s, there was no Howard Frankland Bridge or Gandy Bridge. Michaels said it would take about a day to travel between Tampa and St. Pete by car, and up to three hours by boat.

"Tony Jannus still has the record for getting from downtown St. Petersburg to downtown Tampa the fastest -- 20 minutes," Michaels said. "Sometimes he did it in 19 minutes."

READ: From the Railroad Era to the inverted pyramid, St. Pete's piers took on many forms since the 1800s

Everyone involved with the project appeared to be flying high after the monument was finally installed.

"We're just delighted to have it come in for a night smooth happy landing," Michaels said, adding that Jannus is here to stay. "I think he is up there flying around someplace in the higher heavens."